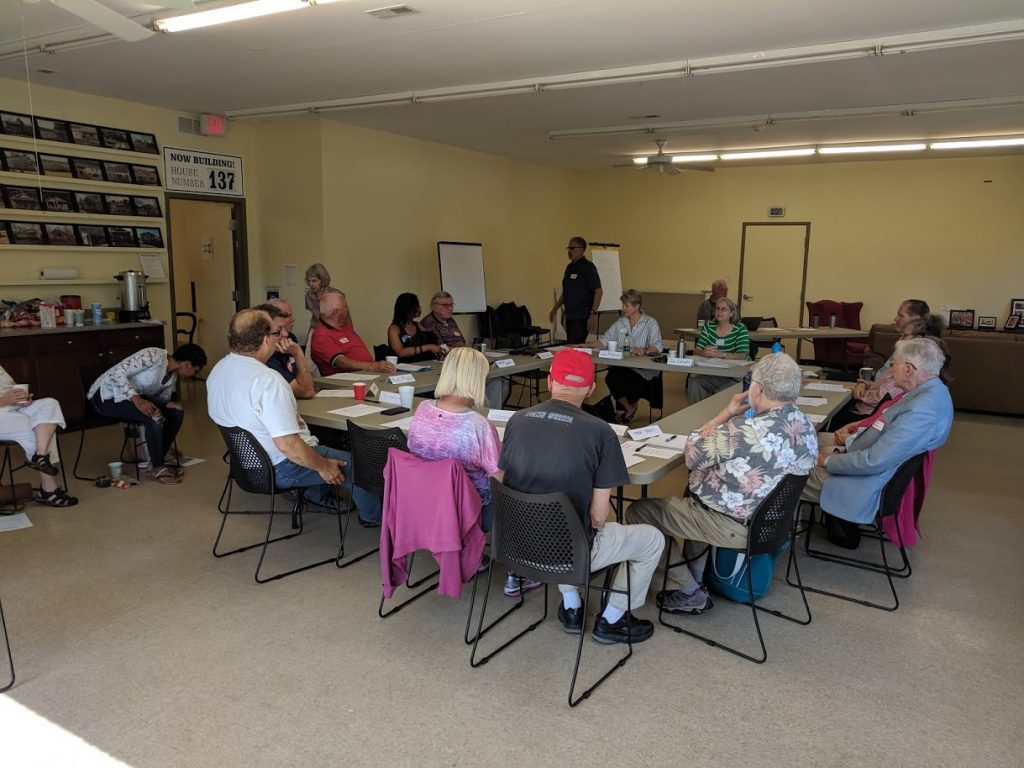 I have been working with a small group of politically diverse women for six years now. We meet once a month over lunch. We have various projects, including talking to the North Carolina legislature and how to end gerrymandering. The legislators were impressed when we came in as nonpartisan group with representatives from both sides.  I  realized for a while now that we have a lot of untapped power available if we could create groups that bridge the divide and make demands from a unified space.

So I was very interested to hear about the work that Better Angels is doing. I took a half day workshop in Durham in 2018 and was eager to see what the full-day workshop would be like because the half-day seemed to short. So I signed up for the full-day workshop in Pittsboro and then attended it on May 18th with about twelve other Red and Blue participants. (Click here for the previous blog post about this workshop).

Differences between the Half-Day and the Full-Day Workshops

The half-day workshop seemed too short to really establish strong relationships or even examine similarities and differences very deeply. On the Better Angels website they recommend a full day over a half day experience and now I can see why.

I helped organize the Durham 2018 half-day event as well and it seemed like a lot of trouble for such a short encounter – but it did lead to more interested Reds who then went to the Better Angels Convention in late June 2019.

The half day workshop consists of the two exercises described in the previous blog post (a stereotype exercise and a fishbowl exercise where one group listens to the other group talk about their reaction to the stereotypes) and then everyone goes home after lunch. The participants do not have an opportunity to ask many questions of the other side.

The full-day workshop includes two other exercises. After lunch, each group created questions to ask the other “color” group. Then integrated groups (two groups, with half of the participants from the Red side, half from the Blue side) discuss questions from each side. Then all participants came back together and debriefed their experiences. The ideal scenario described on the Better Angels website is that people then discuss what they can do individually and within their color viewpoint (Blue or Red) and then working across Red and Blue viewpoints.

Strengths and Areas of Improvement

I think it is pretty impressive how much success they have had with the use of largely volunteer work. The facilitator at the full-day workshop was able to have participants admit some hard truths – such as the Red viewpoint group admitting that some of their members were racists. The “Blues” also admitted that their party had not done a good job defining what they meant by Socialism. People have trouble being this vulnerable in the sound bite mentality in our social media/news world where each side eagerly looks for something to blame the other side for.

The biggest area for improvement is that the workshop seemed rushed as a participant. I think it would have been helpful to spend less time on generating a lot of questions – which we never got to – and instead spent more time on the final exercise that entails finding areas for working together which will ultimately bring our greatest payoffs.

Ruth Backstrom is a semi-retired educator with a Ph.D. in education from the University of Iowa. She is also trained in multiple facilitation techniques, enjoys public speaking, and writing. Ruth has her own nonprofit Solution Generators Network.org which she has used to promote causes in Durham for many years. Some of those projects include helping launch a Food Policy Council, Transition Durham (focusing on promoting more green energy deployment) and helping sponsor End Hunger Now, a local group addressing issues of hunger within Durham. She has also promoted and tried to launch worker owned co-ops. Ruth has done a lot of public speaking, and organizing through another local nonprofit called CommunEcos that was founded by Dr. Sandy Smith-Nonini, a part time professor in Anthropology at UNC-Chapel Hill.