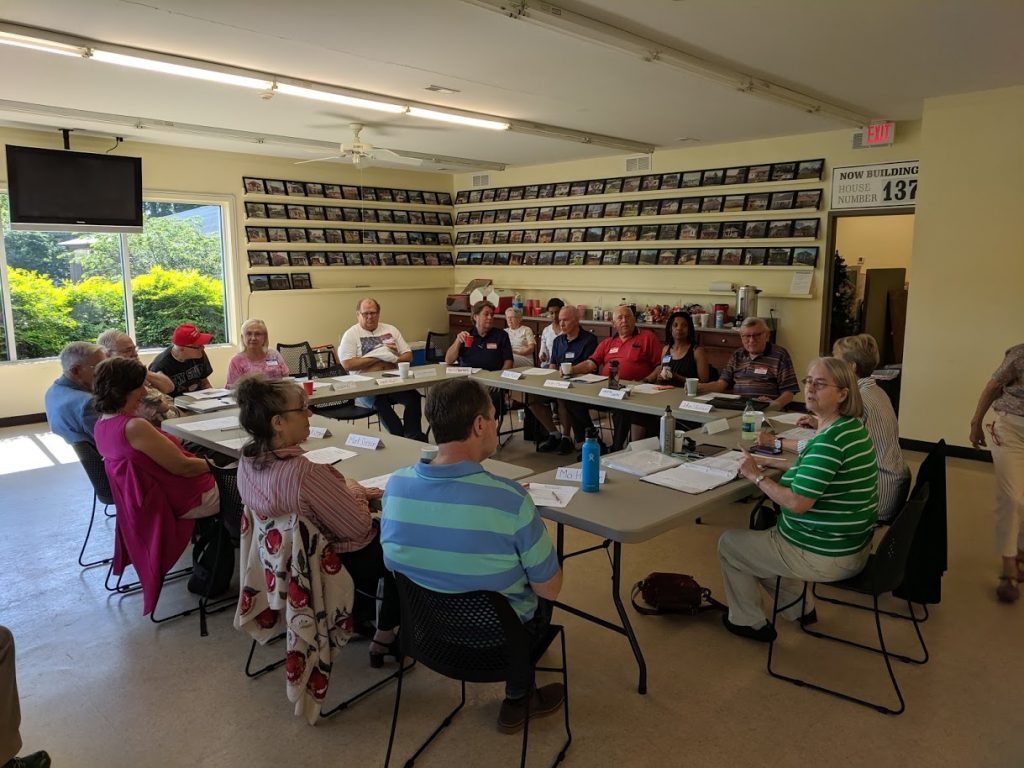 Why would about 15 citizens devote a Saturday to talking about political values when they know there are deep disagreements with half the people around the table? Because they want to explore and address negative stereotypes, practice respectful conversation and seek to understand more than to persuade.

Although community engagement often stays away from hot national political topics, we are glad to share this effort at local-level de-polarization.

The nonprofit group Better Angels has been organizing such dialogues across the U.S. since 2016. There were similar gatherings in 2018 in the Research Triangle (Chapel Hill, Durham, and Raleigh), the Triad, Western NC, and the Gastonia/Charlotte area. A Raleigh dialogue was held Saturday, May 25th.

For the May 18th Pittsboro workshop, we were observers.  In Part One, we offer our thoughts. In Part Two, one of the participants – Ruth Backstrom – offers her reflections.

Background about Better Angels and the Dialogue

Better Angels is a national citizens’ movement to reduce political polarization by bringing liberals and conservatives together to understand each other beyond stereotypes, forming red/blue community alliances, teaching practical skills for communicating across political differences, and making a strong public argument for depolarization (per their website).

Instead of asking people to change their minds about key issues, Better Angels wants to give all Americans a chance to better understand each other, to absorb the values and experiences that inform our political philosophies, and to ultimately recognize our common humanity.

John focuses on two parts of the workshop:

Early in the agenda, Red and Blue participants are divided by their shared color (All Reds in one group, all Blues in the other) to explore negative stereotypes held about them by the other side. They get to name those wrong (often incendiary) views, talk together about how to correct those views, and are asked to identify a potential “kernel of truth” from which the stereotype may arise.

I observed the Red group, and their top five stereotypes were:

When the Blue Group came back to the main room, their list was:

There are three great parts about this activity. First, it gets the stereotypes on the table. Just about any political activist has probably heard some labels that they consider misleading and unfair. Or just WRONG. Having like-minded people address them, and then report to the other group how they see themselves supports bonding within the Color groups. Secondly, it creates space for each group to listen to the other side.

Finally, the “kernel of truth” asks each side to acknowledge how there could be some – however small – factor which feeds into the stereotype. The Red group I observed acknowledged that there are some Second Amendment Gun Rights supporters who want no controls. This group of “Red Thinkers” disagree: while they strongly support the Second Amendment, they can envision some degree of regulation. They discussed some people’s mental/emotional status and risks which could make them not sufficiently responsible to own a gun.

What kind of workshop does not provide lunch? Here is what I think is the genius behind this choice. First, it keeps costs low and avoids the complications of how food is delivered and the likely disruption of the conversation. Second, people will have something they like to eat – they chose it!

Third, food can be a political flashpoint, given dietary or moral issues (meat, vegetarian, and vegan) as well as stereotypes about who likes hummus, or a hot dog, or kale. Better Angels sidesteps this set of choices, and supports participants’ self-reliance for their noontime food. The workshop organizers did provide chips and similar snacks, and had coolers with ice for people to store their lunches.

The second question and answer session was each color asking questions of the other color. Before each activity, the facilitators reiterated that the purpose of these activities was not to convince the other side that your side was better, but rather to share your point-of-view to increase understanding.

Q&A 1: The first session was about answering structured questions from the facilitator about your side. The facilitators asked questions like, “Why are your policies and values good for the country?” and “Do you have any concerns about your side?” These questions resulted in answers about values that protect people and uneasiness about leaders with a lack of vision.

I sat in the room with the Blues and they came up with questions like “How do you envision the separation of church and state and do you feel like anything is infringing on that?” After each side decided on their four questions, half of the Blues and half of the Reds switched rooms to engage in dialogue about the questions. This disproved some stereotypes that the sides had of each other and showed that there was even division within the Reds and the Blues.

Courtney Cooper-Lewter is a UNC Chapel Hill graduate student pursuing a dual masters degree in Public Administration and Social Work. She earned a B.A. in International Studies and Spanish from the University of South Carolina at Columbia in 2015. Prior to beginning her graduate studies, Courtney worked with unaccompanied migrant children in North Carolina. Currently, Courtney is an intern with Chatham County Manager's Office.