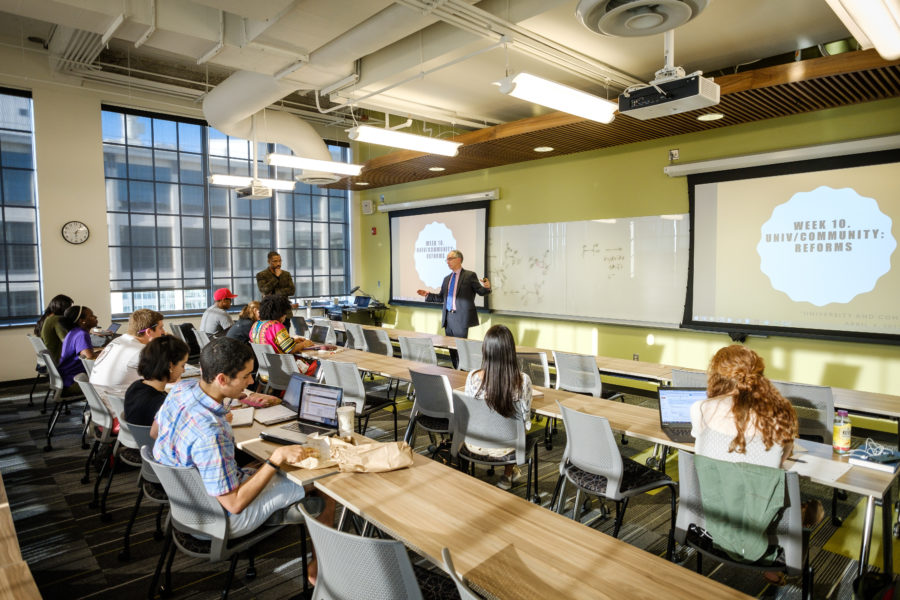 This blog was created in order to put community activists, public officials, and university teachers and researchers in conversation with each other about community engagement.  A fundamental assumption is that we all have something to learn from each other and to gain from working together.  In the spring 2017 semester, two of the universities in Winston-Salem (Winston-Salem State and Wake Forest) pursued similar goals in a team-taught class for undergraduates called “Universities and Communities”.  In this post I’ll explore the motivation and design for the course and what both professors learned from the experience.

The course was the brainchild of Rogan Kersh, Provost and Professor of Politics and International Affairs at Wake Forest and Corey Walker, Dean of the College of Arts, Sciences, Business and Education and John W. and Anna Hodgin Hanes Professor of the Humanities at Winston-Salem State. The two had been “classmates” together in Leadership Winston-Salem and discovered their common interests in understanding universities and the multiple societal roles they play and have played in the U.S.   Students from both universities were recruited for the class.  Here is the course syllabus. I interviewed Dean Walker and Provost Kersh about the class.

Harriger: Why did you decide to develop this course and what did you hope to accomplish? 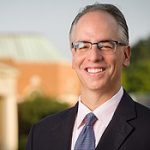 Second, our students are graduating into an American society that is more diverse, polarized, virtual, and global than ever before. Each of those dynamics has ‘problematized’ familiar/traditional understandings of what it means to live in community in others: that also strikes us as vital to explore along with students.

Putting those two features together leads us to wonder whether—and if so, how—universities can be engaged partners with the communities surrounding them.  That was the animating question that guided our class, and that led us to conceive the course in the first place.

A final spur was our interest in better linking our two storied institutions.  Less than ten minutes’ drive separates our campuses, yet we have very little history of meaningful collaboration, especially around academic engagement. 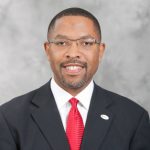 Walker: Last year, Rogan and I began tossing around the idea of team teaching a class that would address a big idea (or several big ideas) that would simultaneously help to increase collaboration between our respective institutions. We hashed out the formal outlines of the seminar in September over multiple cups of coffee at Krankie’s  (a local coffee shop). The idea of exploring the relationships between universities and communities captured our imaginations since we would have to address questions of politics, history, race, place, and space. One of the big things we wanted to do was to create a unique learning experience that would bring together students, faculty, and community members to learn together. And what better venue to do this than a newly opened WakeDowntown!

Harriger: Can you explain how the class was organized and your expectations for the students?

Walker: The seminar was organized thematically with an acute focus on the local Winston-Salem community. It was intentionally designed to provide students with multiple points of entry into a wide ranging conversation on the relationship between universities and communities across space and time. We wanted the seminar space to be one which welcomed diverse viewpoints and encouraged critical self-reflection. Moreover, we wanted the ideas and questions of students to guide and critically inform the seminar. Thus, we designed the seminar as a “convergence space” where students would critically engage the complexities and contradictions of this subject while continually taking up the open invitation to think and rethink this subject.

A key feature of the seminar was the organic link with the outstanding work of our “communiversity” faculty colleagues. In many ways, our community collaborators – “scholars without portfolio” – made this seminar a success.

Our hope was that by engaging ideas from Cardinal Newman to W.E.B. Du Bois to Nancy Zimpher combined with the legacy of Local 22 (a tobacco workers’ union that organized in Winston-Salem during the 1940’s   and the ongoing work of Neighbors for Better Neighborhoods, our students would generate new knowledge (and new questions) which would help us to address some of the deep and pervasive issues plaguing our society and our Winston-Salem community. 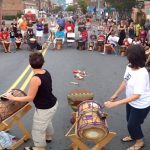 Kersh: We organized the first three weeks around changing understandings of ‘community,’ exploring each of the four dimensions (diverse, polarized, virtual, global) noted above.  The next three weeks we traced the history of university education, with a particular focus on shifting expectations of colleges/universities in the U.S.  The final seven weeks involved putting these two movements together and making sense of how colleges/ universities might best—if at all!—engage with the communities they inhabit.

Along with regular readings/videos & class activities (including discussions with a variety of guests), students organized into three community-engagement project teams. Their work spanned the entire semester, from mid-January through early May, and culminated in presentations of findings to classmates and some 20 community leaders/advocates.

We expected students to engage forthrightly with class material, immerse themselves—intentionally, thoughtfully—in community projects, and address in increasingly nuanced ways the core question about universities/communities: put bluntly, whether universities have any meaningful contributions to make to their surrounding communities.

Harriger: What are your most important take-aways about university-community relations from having taught this class?  Do you think any differently about university/community partnerships as a result of teaching the class?

Kersh: Early on we had students brainstorm a list of how colleges/universities might usefully contribute: ideas included “Run a Pre-K program for at-risk local kids,” “Organize meals for children living in food deserts,” and “Partner as mentors with high-school students seeking jobs or college opportunities.”  My co-teacher, Dean Walker, wondered with a devil’s-advocate air what evidence students could muster that higher-ed institutions like ours would actually perform any of those ambitious services successfully. The themes raised in that discussion recurred across the semester, and we’re still carrying them on with students by email.

Walker: Inasmuch as this subject is inexhaustible, I realize that it is so vitally important for us to engage it continually. In an age of “cognitive capital” where knowledge production and reproduction is also the primary means of how people live (and die), the relationships between universities and communities takes on added importance for life itself.  In many ways, this is not only a historical and political issue. It is a deeply ethical concern that challenges us to respond to the fundamental issue of the worth, value, and dignity of all people.

For me, this seminar renewed my belief that the struggles for the life of the mind are struggles intimately connected with the kind of world in which we want to live. We cannot disconnect the work of the university from the broader communities and societies of which the university is a part. The title of Vincent Harding’s germinal 1974 article in the Harvard Educational Review, “The Vocation of the Black Scholar and the Struggles of the Black Community,” captures the sentiment animating my scholarly interest in this subject and articulates the deep ethical commitments that were renewed as a result of this seminar.

Harriger:  How prepared are college students to engage in community partnerships around policy issues?  What do they have to contribute?  What can they learn from the experience?

Walker: College students are well prepared to engage community partnerships around policy issues. They bring a host of experiences, perspectives, and knowledge to bear that open up new terrains of thought for this subject. Students never cease to amaze me with their synthetic forms of thinking that combine the creative and the critical always undergirded by the ethical. Their undying interest in how shall we live is one as a just society is which should guide our deepest normative and political commitments.

College students (as do all students) learn a great deal from our community colleagues. Whether one has a Ph.D. or no D, students (and that means all of us) can learn from a multiplicity of people, experiences, settings, and spaces. Thus, the university is a universe of learning that is neither bound by the walls of a classroom nor circumscribed by the borders of a campus. The university is the community where students learn from life itself.

Kersh:  I’d say that all two dozen students entered the class firmly believing that a core mission of colleges/universities is to enhance the lives & prospects of those sharing towns or neighborhoods with the university. Moreover, they took as an article of faith that students’ experience of college was incomplete or even morally suspect if not including significant time devoted to community engagement.  Both those tenets were shaken, & across the term (for most of our students) reconstructed on firmer ground.  They mostly arrived with a sense of HOW to engage with neighbors (as partners, mutually developing goals/efforts at community improvement).  Whether universities’ missions, or students’ purpose, indeed lies principally or in meaningful part in such engagement was examined from every side.

Another useful lesson concerned students’ deeper sense that the university/college has a history—both as an individual institution, and as a collective body—and that reconstructing & understanding that history can be very helpful in advancing fruitful versions of community engagement by students, faculty, and staff alike.