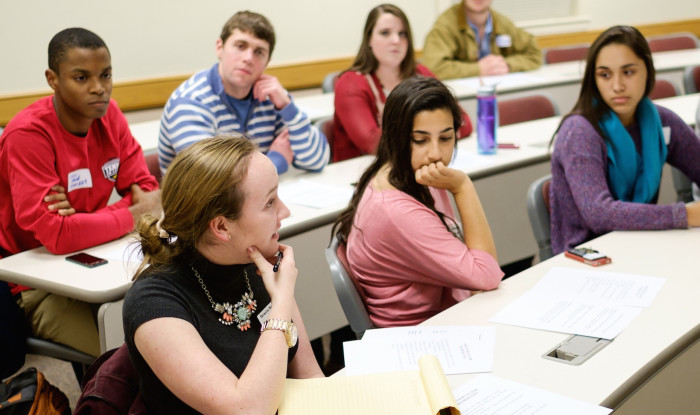 In past blog posts those of us in higher education have focused on issues related to disseminating research findings  and working in partnership with community groups.  In this post I want to raise another issue – one that focuses on our teaching mission.

While it often seems that the primary purpose of higher education has become only job preparation, there is another movement afoot that focuses on restoring the civic mission of higher education. When the first universities, both public and private, were established in the early days of the republic, a significant emphasis was on preparing students for life in a democratic society.

The question I’d like to discuss today is what it is institutions of higher education, whether they be community colleges or four year institutions, should be doing to prepare their students to be engaged citizens after the graduate? What skills, habits, and dispositions would those of us living in these communities want them to have and how might we best teach this?

I am interested in this question both because I am a political scientist who teaches American politics and because I care about the health of our democracy, from the ground up. I worry about the increased polarization in American national politics and the way in which it has seeped into state and local politics as well.

One way I have tried to address these concerns and questions is through the teaching and practice of deliberative dialogue. In recent years I’ve also made it part of my research agenda.

I have been working with colleagues from the Communications and Psychology departments on a long term study of the impact of learning to engage in deliberative dialogue while in college.   We started the project fourteen years ago with a group of incoming first year students in the Fall of 2001. They took a first year seminar on Democracy and Deliberation and learned both the theory and practice of deliberation. During their sophomore and junior years they organized and moderated deliberations on campus and in the community.

When these students graduated, they had developed attitudes about participation and politics that were different from their class cohorts who were not in the program. One of the stand-out differences was how they talked about why they would participate in politics in the future. The students who had learned to deliberate defined citizenship responsibilities as working with others to address challenges in the community. Students without the exposure to deliberation said they would participate in order to protect their self- interests.

We recently completed a follow up study with the alumni of this program.  We wondered whether these differences had endured out in the “real world” and whether they thought their education had prepared them to be active, engaged citizens.

We found that the program effects endured. These alumni were more willing to talk with others with whom they disagreed, were more engaged in political activities, and were still using their deliberative skills in their homes and workplaces.   These findings give us hope that teaching students to deliberate is one way in which colleges and universities can fulfill their civic mission.

I would love to hear from others in higher education about other kinds of classroom and experiential learning that appears to work.

You can learn about the first study here. We are nearing completion of the full report on the follow-up for the Kettering Foundation.

I am also anxious to hear from those of you in local government and in communities what you think is missing from the knowledge and skill set of young people who leave college and join your communities. What do you wish we were teaching students to do and think that we don’t appear to be doing now?

2 Responses to “Preparing Engaged Citizens for Life in Community”