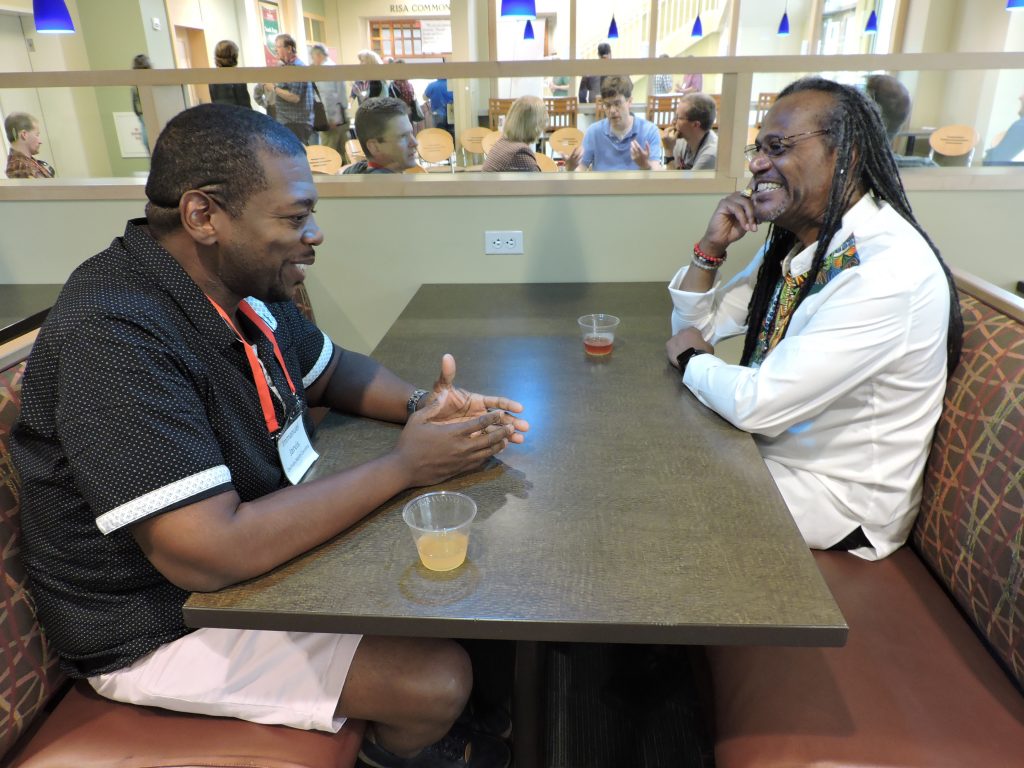 How does a group that focuses on local dialogue of 12-25 people create a meaningful national convention of 300 delegates? Made up of people who deeply disagree with each other’s ideologies? Well, Better Angels did so June 20-23 in St. Louis.

Delegates register in pairs, one “Red” (a conservative viewpoint) and one “Blue” (a liberal viewpoint) from the same community. The rule insures balance of participants. I spoke with two Durham, NC participants.

Better Angels aims to keep its integrity through balancing the Red/Blue in their work. That extends to:

Immanuel:  I listened carefully as the described the structure of Better Angels nationally. They were clear about their money sources, reasons to keep membership inexpensive and their foundations connections. Their commitment to only receive money to maintain a 50/50 balance from liberal and conservative sources is admirable. Money is the real test. Their team has taken that vow. That means a lot to me.  Integrity must permeate an enterprise such as Better Angels.

Ruth: Better Angels focuses on what local people can do through respectful listening. It is the first step for giving power back to the people.

Immanuel: That is the battle cry of conservatives: government should stay out as much as possible. People retain their power.

They are creating the better telephone be making communication clearer. However, they are not in charge of content.  There ARE differences in policy. And not just red/blue – religious people and atheists, ideas about the family on abortion and many other issues. So, it is a better way for people to be heard, but not a censor on what people believe and how they stick to their principles.

Curiosity, and really Wanting to Learn

Ruth: Just about everyone was curious. They were patient. They were really seeking understanding. They had chosen to there. That was powerful.

Immanuel: Delegates were not trying to “slay people with their rhetoric.”  It was a very peaceful place, and so unlike so many other political forums.  I was glad to be learning about different perspectives. It depends on appreciation the person as a real human being. It fits very well with my faith. You understand why they care about an issue.

From being Marginalized and Maligned to Gaining Respect

Immanuel: I found Better Angels attractive because of my experiences of being maligned and stereotyped.

I am a former Democrat.  It is easy for me to understand “Blues”. Durham Republicans must communicate about what we believe in a way that is attractive to other people. We cannot match tit for tat on negative things. Social media magnifies the worst in society. It is too easy to go ‘low’ because you can say the most vile things hidden behind a keyboard. I see Better Angels as the path forward on respectful, balanced, real exchanges among Red and Blue partisans.

I help lead a county where 12-13% for the registered voters are Republicans.  We are a minority in the big blue sea of Durham. Anything that works on authentic, respectful, and person-centered dialogue that builds relationships, I’ll be there.

What is missing in our political talk is authenticity before ideology. Better Angels is a good way to do it. The approach helps everyone get beyond the finger pointing.

I connected with a “red” delegate from San Francisco who felt similarly maligned and disrespected.

When we DO talk in civil manner, the differences are not that big. It is how we get there – not what, but HOW we reach the common goal.  A good platform that supports civility and real discourse.

Ruth: All the polls show we are a lot closer than the political diatribes. It is very important for citizens to come together – we are not that far apart.

Ruth: I enjoyed a session on religious communities. It focused on how to get them involved, and there was a spectrum of religious leaders from Focus on the Family  to the Unitarian Church.  All were good speakers.  Some promising ideas about how to go into religious communities for dialogue across difference.

David Blankenhorn (founder of Better Angels) used questions to reveal that both sides had a massive frustration about their government. Both agreed that all too often government folks ‘says one thing and does something else.’  They are not ideological foes. So, when they got together it was not a real debate.

Can this Kind of Dialogue work for “Race at the Center” Conversations?

Ruth: I heard the presentation by a Blue delegate She is interested in doing a talk about race via the Better Angels model.  She thinks people will go deeper due to the creation of respect through the Better Angels approach.

Immanuel – Hmm, Race…. This will get deep very quickly.  As a born-again Christian, and African American, I have seen through history people groups who are overlooked or dominated all the time.

Any dialogue on race needs to be very thoughtful and honest about institutional racism and the different ways it arises in societies around the world.  For the U.S., we are a young country. We have to ask ourselves,” Where have we come in 243 years?” We are about the equivalent of an 18- or 19-year-old kid. We have made some big, boneheaded, dumb mistakes that have hurt many people needlessly. What individual can’t admit to that personally in their own life?  But we are getting better, maturing, learning from our errors. We are still young – able to improve our national soul.  I choose not to focus on “dumb” 18-year-old parts of the US experience and recognize the achievements of this relatively young ‘experiment’ called America.

Immanuel: When we DO talk in civil manner – the differences are not that big. Most Americans agree on the big things: a safe neighborhood, strong families, good schools. The question is how we get there. Not the WHAT, but HOW we reach the common goal.  Better Angels is a good platform that supports civility and real discourse.

Ruth: One more thing. I connected to when people on the same side of the issue had differences. Those differences within a Red or Blue perspective are ways for all of us to learn.

I hope to do policy work in a Red/Blue manner. Can this be done without backlash as the 2020 elections approach? Can we agree to have better conversations and more nuanced conversations even as we gear up for partisan battle?

What questions do you have for Immanuel and Ruth?