Many of us were following the Facebook hearings this April in which nearly 100 members of Congress questioned Facebook founder Mark Zuckerberg. The hearings came after news broke that Cambridge Analytica, a data firm with ties to President Donald Trump’s campaign, accessed information from as many as 87 million Facebook users without their knowledge.

While the outrage focused primarily on consumer privacy, it also elevated interest in Facebook’s impact on civil discourse and domestic institutions around the world. We are learning more about the addictive nature and manipulative strategies of Facebook and other social media.

I am looking forward to hearing from Eva Guidarini of Facebook’s government outreach division who may address some of these issues as a presenter at the NC City & County Communicators (NC3C) Annual Conference in New Bern April 18-20.

When my 19-year-old son Nick (photo) gave up his smartphone last Christmas, he wanted to improve his concentration and mindfulness. Over these few months, he observes that his friends instantly whip out their smartphones when there is an uncomfortable silence and lull in conversation. He notices that people are not always engaging in real life and the moment. 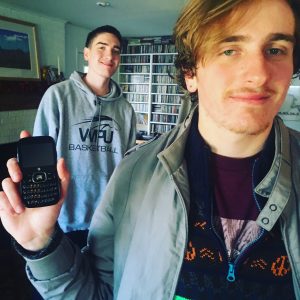 He felt addicted to social media and the smartphone made it all too easy to access it many times a day. He’s not alone. Apparently, about half of Americans openly admit they couldn’t last a day without their smartphone. Read Thomas Goulding’s experience in “How getting rid of my smartphone revolutionized my life” in The Independent.

Are we becoming overly focused on social media for engagement?

Nick’s distinction between real life and social media life hit home with me in the professional arena too. Because I realize that we are increasingly focused on social media as a tool for community engagement.

Getting active on social media made a lot of sense for the Town of Chapel Hill about 10 years ago when we saw it as a great way to reach UNC-Chapel Hill students. Since then we have grown to more than 20K followers on @ChapelHillGov Facebook, Twitter, and Instagram. We have been excited to watch the growth of our communication and engagement channels, especially since our local newspaper folded.

And then I gained a new satisfaction – finally, as government communicators we have data to demonstrate results. We have social media analytics – the impressions and engagement data on Twitter, likes and views, reach and reactions on Facebook, and so on. The data tracks our community engagement – on social media, at least.

If I have an addiction, it is in tracking social media analytics. If you check out our communications dashboard, you’ll see what I mean. Credit goes to Mark Losey for creating these each month. But I have to remind myself that this is a small part of our overall engagement with the community. 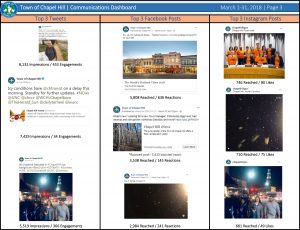 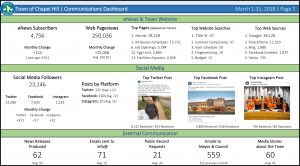 Reminding myself to stay humble and honest in community relations

I am curious to know how others measure progress for broad and long-term community engagement.

As a local government, we have meetings, lots of them. While we put out information to the public to announce these events, we do not track the engagement that occurs during or after the meetings. Is this a missed opportunity?

While we track the numbers of applicants for advisory boards such as the planning commission and housing advisory board, we do not track the number of registered voters and participation in our local elections. While we ask questions in our biennial Chapel Hill Community Survey to rate satisfaction with “level of public involvement in Town decision making,” more than half of all respondents answered “neutral” or “don’t know.” (27% very satisfied/satisfied; 57% neutral/don’t know and 16% dissatisfied/very dissatisfied).

These questions are a reminder to myself to stay humble and honest about the supposed engagement created on social media platforms. While I value them as part of a portfolio of varied efforts, I will continue to search for richer and more creative forms of community engagement. Where better to look than right here!

One Response to “Are we overly focused on social media?”