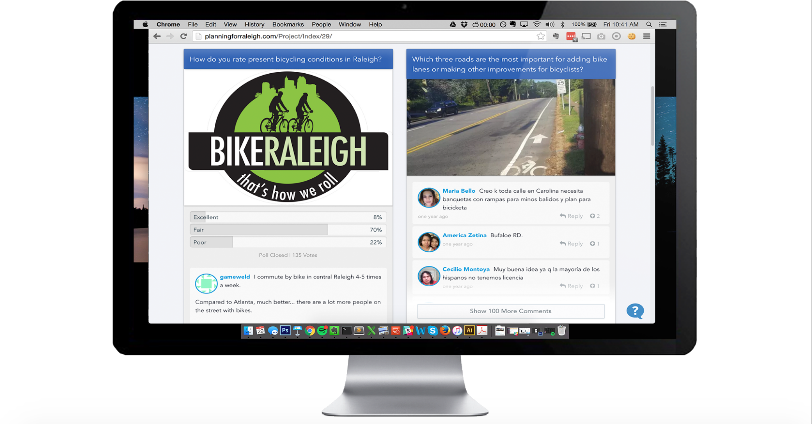 This post was written by Brad Johnson and Sharon Felton. Brad Johnson is the Director of Engagement for Raleigh based Cityzen. He assists with implementation of projects and consulting with staff on the best approach. A former member of a planning staff, he’s worked with over a hundred local government entities to optimize their online engagement.

Sharon Felton is the Communications Administrator with the City of Raleigh Public Affairs team. She works with departments, including the Department of City Planning, to implement communications strategies that best fit their needs.

The City of Raleigh was faced with a dilemma when approaching the public outreach portion of their citywide Bike Plan. A passionate, well established group of cyclists would be engaged throughout, but staff didn’t want to assume that they were the only stakeholders in the process. Reaching others for what would be a relatively technocratic discussion seemed like a big challenge.

As civic leaders, we often take for granted the notion that interested citizens will participate in the public input process. We work through our list of outreach channels, such as our website and community groups, but the efficacy of these efforts are difficult to quantify. These results are often self-reinforcing as well; one advocate will tap their network of friends and suddenly meetings have the appearance of a very public process, yet lack a diversity of perspectives.

The City of Raleigh is challenging this assumption by advancing the approach of reaching out to as many residents as possible, and meeting them where they are. Historically, this meant going to existing neighborhood and community meetings or even going to a place of gathering, such as a grocery store or public event.  These approaches typically address one demographic and the city wanted to reach a more diverse audience.  In the case of the Raleigh Bike Plan, this meant trying a new approach through targeted online advertising.We used this approach in addition to traditional outreach efforts.

To conduct this online outreach, the city turned to Cityzen, an online platform built by Raleigh tech entrepreneurs in the city’s bustling Warehouse district.  The company has tools to integrate Facebook’s advertising platform with a project website and survey.  The Raleigh Planning Communication Group (now part of Public Affairs) worked with Cityzen to develop a targeted social media advertising campaign to engage underrepresented populations, and then synchronize comments and responses into a central database.

The City approached the outreach for the project with three priorities:

Next, they identified the new constituencies to be engaged. The visible cycling community in Raleigh already attend meetings and participate in advocacy. They were firmly connected to the project website to participate. What staff realized, however, was that these very visible users were not indicative of the full story of cyclists in Raleigh. In order to complete the story, they targeted three key constituencies:

In the Fall of 2015, 44,000 people were reached via facebook advertising, 8,500 visited the project page, 600 voted, and 206 left comments during the open 30-day period.  Spanish-speaking residents responded at higher rates than any other demographic group.

The City leveraged Cityzen’s integration with Facebook to gather comments into the survey even if those who responded didn’t make it to the full survey. Once a user took the survey, the results were immediately available to participants and staff, prompting further conversation. When the survey period was finished all the data was aggregated quickly allowing for planning decisions to be more informed. More residents were engaged than any previous project over a similar 30-day period.

Citizens signed up to receive updates and were invited to workshops the city held.

Because the City reached out to under-served and underrepresented groups, corridors were identified that would not otherwise have been studied or prioritized.

Responses showed that the streets that should be addressed were greater than expected. This broader dataset gave decision makers greater confidence when determining citywide infrastructure priorities.

Today those priorities are becoming reality in a safer, more bike-friendly city for all Raleigh residents.

Our lessons in this experience are:

Brad Johnson has worked with over a hundred local government agencies to implement their online web technologies. A planner by training, his focus has been on realistic online engagement through simple but effective tools that make it easy for staff to offer information and feedback opportunities online. At Cityzen he helps push the product to reach the public where they already congregate by lowering the barriers to participation. He’s active in his community serving on several boards and contributing his geekiness to their objectives.