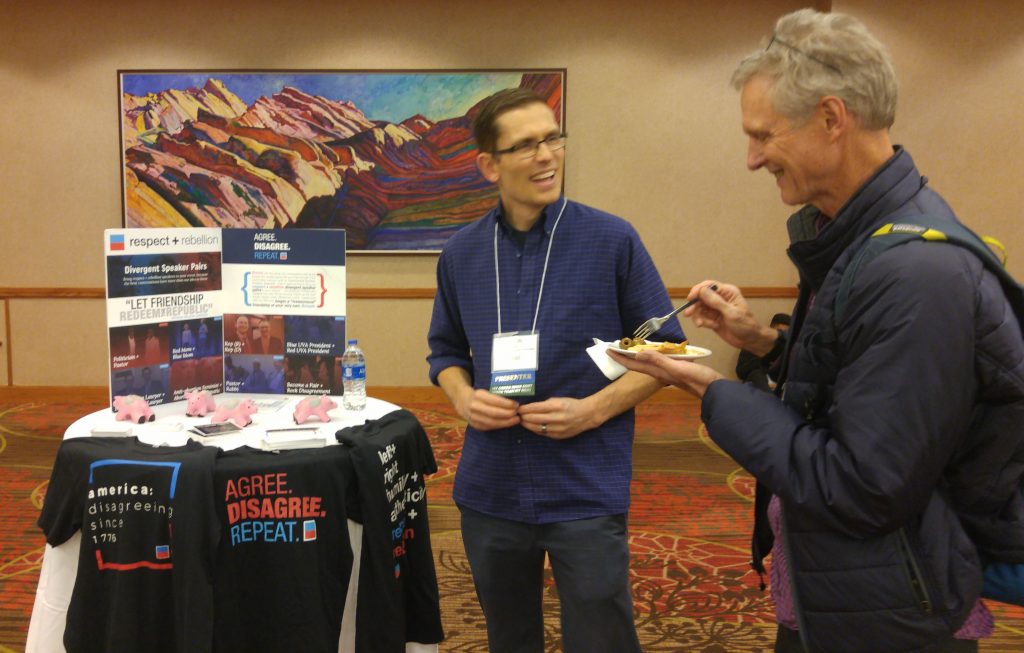 Within the community engagement community, best practices are sometimes hard to identify.

The context of, say, a small-scale event dealing with restorative justice differs greatly from a packed city council meeting covering zoning permits. The message, audience, program design, and feedback mechanisms can be completely different, which makes standardizing a set of guidelines an oft-impossible task.

Still, there are a few gatherings that bring together enough diverse, experienced, and motivated engagement practitioners that something approaching best practices can be found across many of community engagements’ subfields, from productively navigating race relations to developing responsive digital platforms.

The National Coalition for Dialogue & Deliberation (NCDD) is probably the best example. Lucky for me, Denver (my home), hosted their most recent annual conference in November of last year.

With more than 70 workshops and sessions available to choose from across four days, the hardest part was figuring out where to spend my conference time.

Here are some highlights from three sessions I attended.

Day 1 – D&D for Everyone: How do we get everyone to participate?

I decided to dive right in to one of community engagement’s most difficult questions – how on earth do we maximize participation?

This session was relatively unstructured, which allowed small groups to come up with numerous ideas that were then shared with the room. One key takeaway many of us arrived at was on an issue that is often glossed over: language.

Language and Ideology – Who “Welcomes Dialogue”?

Let’s face it: community engagement and D&D initiatives are usually carried out by progressive/liberal practitioners. While this may have something to do with the innate differences between many conservatives and progressives, what it means is that much of the language we use to publicize our events, conduct them, and gather feedback from them may be imbued with a liberal bias.

Terms like “diversity”, “safe space”, or even “dialogue” itself are often viewed in a partisan light, which may skew the demographics of who shows up and who participates more frequently.

Luckily, there are some resources that can help us be more aware of our language, like the online Red Blue Dictionary or a growing number of political dialogue courses offered at universities. 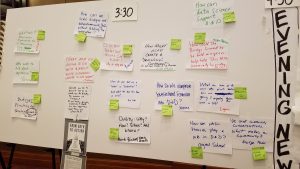 Can we Dialogue with our Passion and Frustrations?

Another issue I we found useful to discuss was the degree to which participants are encouraged or expected to check their frustrations and convictions at the door.

On paper, engagement projects often encourage a diversity of viewpoints, but some may be implicitly accepted more than others through, say, the responses that the facilitators choose to emphasize, or even the way a participant who expresses an unpopular opinion is glared at by others.

Many of us have probably witnessed well-intentioned D&D practitioners define numerous topics as “problems,” which implies that somebody’s at fault. This can be at odds with encouraging feedback from participants who may be afraid of being blamed if they speak up.

I have never been to an anti-racism workshop, so I thought a workshop led by David Campt, the founder of the White Ally Toolkit, would be a great place to start.

As a veteran of the Clinton White House’s Initiative on Race and America Speaks, David knows how to distill a lot of information on how to have effective conversations on race into a short time period while keeping everybody in the room entertained. And he certainly did not disappoint.

While his anti-racism trainings are typically given to white participants, this was a mixed-race crowd that engaged him as he spoke on concepts ranging from the empirical – e.g. racial anxiety – to more practical tools, like the types of icebreakers that can be useful in reducing some of the tension that envelopes meetings on difficult topics (such as race).

One key takeaway that I walked away with was David’s quippy but powerful advice to find the “chocolate in the trail mix” of what a person is saying.

When we’re dealing with community members who have views that may be antithetical to ours, there are almost always remarks they make that we can relate to. For those of us who keep abreast of the literature, the power of small talk should not be a surprise. But David went a step further and emphasized the importance that positive acknowledgement has in ultimately changing people’s views.

Simply pointing out things you agree with by others who share an individual’s race, ethnicity, or politics, for example, markedly increases that person’s willingness to continue talking to you and, ultimately, their openness to gradually changing their views on thorny subjects.

Finally, I capped off an inspiring time at NCDD 2018 with a discussion on police-community relations, in part since I sit on Denver Police Chief Paul Pazen’s Community Advisory Board.

The session saw a pair of practitioners – one from the Institute for Policy and Civic Engagement at the University of Illinois at Chicago, and the other from Illinois’ Attorney General’s Office – speak in depth about 14 “community roundtables” they organized across Chicago as part of the city police department’s ongoing federal consent decree. They were followed by Chief Pazen and Denver Office of the Independent Monitor (OIM) Community Relations Ombudsman Gianina Irlando, who described a novel program breaking down some of the barriers between police officers and youth.

My impression after hearing these success stories was that both sides in some of the most intractable disputes can substantively cede some ground and gain some empathy for the other side if community meetings and the feedback mechanisms which follow them are effectively designed.

In the Chicago example, the meeting organizers spent a considerable amount of time recruiting participants from affected communities, hiring translators for each table, training facilitators, and designing the layout of their World Café-type engagement model so that everybody knew what ideas each table was bringing up, without fears of “problematic” points of view being forgotten.

Closer to home, the Denver collaborative model between law enforcement and their civilian oversight body emphasized how empathy-building can be quantitatively shown to increase if officers are given enough classroom training, local community leaders (and, in this case, a hip hop artist) help conduct the sessions, and youth are encouraged to participate through strategically placing them with officers in a safe environment whom they have had no personal contact with.