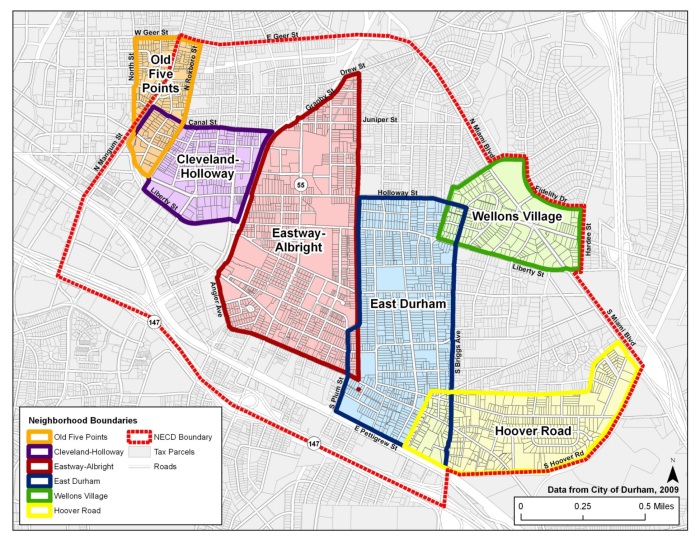 This is about community engagement at its core, with the community being a full partner. The process worked at the start, even if it wasn’t sustained.

The Northeast Central Durham Partners Against Crime (NECD) started with 8 Durham neighborhoods; Edgemont, Hyde Park, Albright, East End, Hoover Road, Y.E. Smith, Wellon Village and Sherwood Park. The driving force behind NECD was Calina Smith & Willard Perry, from the Community, Carl Washington, the City’s liaison to NECD, and Michael Page, the County’s Human Services Coordinator. As conversations began in the neighborhoods, most of the leaders along with Chief Jackie McNeil bought into the Weed & Seed Concept; which was that Law enforcement would help weed those neighborhoods of most of the criminal’s elements in the area & the City & County along with the neighborhoods would sow seeds of prosperity.

Chief McNeil convinced Sheriff Al Height to join forces with the police department to help make those neighborhoods safe. The biggest issues were how to get everyone involved in the community in a way that was safe for them and allowed for planning and implementation of crime prevention. It was agreed that whatever process or group would become the voice that conveyed the will of the community as a whole to the City Council & County Commissioners.

After months of discussions and painstaking research it was agreed that the name of this group would be Partners Against Crime, because crime was what had brought us together. It was understood that even through that was our name that wasn’t only what we were about. We were about making safe, decent & productive neighborhoods. We were about helping the people improve their lives by bringing jobs, businesses, building better schools, making sure our parks and playgrounds were nice & well kept. Making sure that we had decent housing, that dirt streets were paved, and there were sidewalks on our streets in the neighborhoods. This was to be a partnership with the city & county governments, where the community was in control not city or county staff. The borders were Dillard Street to West, 147 to the South, Dowd Street to the North and East End Ave to the East.

The many challenges faced by Northeast Central Durham:

Let me set the stage for you of what was really going on in what we called Northeast Central Durham in the early nineties.

Jobs were leaving Durham, people had to make money anyway they could. Housing was so bad that the best housing in the area was Few Gardens. Drugs were the big money maker, with guys coming from New York, Arkansas and Florida. Most of the people from Elizabeth Street to Guthrie Street were jobless, under paid or on public assistance. Only a few men in households were trying to be responsible, so most women headed households. Women were working so much and so hard that they didn’t have the time or energy to put a lot of time with their kids so the kids were out of control.

Gunshots could be heard any time of day or night. The police were afraid to come into our neighborhoods, so there wasn’t much help. The Political Leaders stayed away from us except with police escorts. Some of the Political leaders owned and rented substandard housing.

Our schools were the worst in the system. Our playgrounds were overgrown with weeds; you could go to any of them and come out with bags of needles and condoms. Public Housing was at a crossroad: Liberty Street, Few Gardens, and Hoover Road all were drug-infested communities. Drug dealers and prostitutes were running Canal, Juniper, Hyde Park, Barnes Ave, Taylor, Maple, Guthrie, Angier, Hardee and East End Ave. It was hard for the good community people to openly help law enforcement, not only because of the danger but a lot of family members were involved in illegal activity. It was also at this time the teenage girls were becoming young mothers. City officials had no clue as to how to help Northeast Central Durham but they realized that something had to be done because Northeast was a stain on Durham as a whole.

From Weed & Seed to Partners Against Crime:

Chief McNeil decided to try the Weed & Seed Strategy. The key component in this was community buy-in so Chief McNeil and then City Manager Orval Powell turned to Carl Washington to help get the communities in Northeast Central Durham involved. That was when Carl started talking to Calina & Willard about Weed & Seed and convinced them it was just what Northeast Central needed. The communities were so isolated that hope was gone, there was no American dream for many of them nor was there hope that things would change, not for those committed to stay. The community just didn’t know what to do until Calina and Willard came along and got them organized.

Calina and Willard started contacting leaders in the different neighborhoods individually, explaining the Weed & Seed concept and invited several to meetings with Carl to discuss the PAC organizational structure that Chief McNeil and Captain Steve Chalmers had been thinking about, which was the one thing that could bring the neighborhoods together where their concerns about the crime in their area could be address. Now community policing was also a new effort that Sheriff Al Height was trying to get the county’s buy into, so the Weed & Seed strategy was a perfect match.

The structure called for each neighborhood to be broken up into blocks with between 2 to 4 block captains. The vision was that you could have about twenty or more block captains per neighborhood, meaning that PAC could bring together about 160 members for meetings to discuss problems, plan possible solutions and implement them. Two Co-Facilitators would lead PAC. The Co- Facilitators would be responsible for the agenda of all PAC meetings, recruitment of other neighborhoods and to go out and speak & represent the PAC to the County, City officials, Businesses & any other partners that were needed. The block captains were to be the eyes and ears of their blocks, to be the point of contact for that block and to report issues and problems of their block.

The PAC also had 6 task forces to help find solutions to issues identified in the neighborhoods block by block by the captains. The 6 task forces were Law Enforcement, Youth, Religion, Health, Housing and Education. The PAC had complete City & County buy-in. Each Task Force was to be headed by a community person with a city or county staff person as support. Making sure that PAC had that support from the city was the responsibility Carl Washington for the city & Michael Page for the County.

What made the Weed & Seed strategy effective was that it called for communities to look at the issues facing them in a way that made them attack the root causes while addressing the problems at hand. This was a whole new approach for community leaders. They had to come together, have open & honest discussion and trust each other, something totally unheard of in Northeast Central at the time. It also called for complete buy in and support from other entities from all over Durham County to work in partnership with the residents of Northeast Central. It had to be a partnership and not for these groups to come in to do it for them. The Residents had to have ownership of the changes happening.

In the beginning it was very difficult because everybody had their own ideals about how things should be done. There were many heated meetings with leaders threatening to walk away and even a few where we almost came to blows but we refused to give up. The best thing about having Calina and Willard as Facilitators, were they complemented each other. Calina was stubborn and loud while Willard was calm, thoughtful and a peacemaker. They were the best team at that time. It became obvious that Public Housing residents had to be brought into the process. Calina & Willard sought out Lonnie McAdams, the Few Gardens Resident Council President to help bring those communities into the PAC fold. Mr. McAdams handed that responsibility over to Stephen Hopkins, a VISTA Volunteer and resident of Few Gardens. Within the borders of Northeast Central Durham there were Oldom Towers, Liberty Street, Edgemont Elms, Few Gardens, Sacred Site at Hyde Part, Sacred Site at Gary Street and Hoover Road Public Housing communities.

Good changes, but not a sustaining commitment to community control:

Things started to change, neighborhoods were having meaningful discussion, and plans of action were taking shape. Partners and resources were being identified, different groups were coming in to help and things started to change for the better. Eastway Elementary School was built; there were talk about Hope 6 coming in to improve the housing stock. The city started making slumlords bring their housing up to code. Northeast Central became the focus of grants from the State and Feds. Its demographic was ideal for grants from all over the country, all of a sudden all eyes were on Northeast Central and the neighborhoods started to have hope again.

Like any community engagement process that is started by a government entity it is subject to the political will of the present leadership and city or county staffers. As the political landscape changes so will the force behind the engagement process. That along with staff stealing community ideals and programs, non-profit organizations turning community leaders against each other by getting them to sign off on programs that the communities believe they can implement themselves better and before long the process is soon forgotten and the community is back at the beginning with no true direction or dedicated leaders to fight for it.

Map reprinted from Six Northeast Central Durham Neighborhood Plans, Spring 2009. Prepared by the University of North Carolina at Chapel Hill Department of City and Regional Planning, under the guidance of Dr. Mai Nguyen of UNC, Dr. John Cooper of MDC, and Mr. Earl Phillips; with the support of the Northeast Central Durham Leadership Council, for the Department of Community Development and the City of Durham, NC.

I am Stephen Hopkins; I’m a 58 years old single father living in Durham North Carolina. I was born here and love the County and city of Durham. I have served on several city boards and have been a community leader for many years. I was a member of the Durham Housing Authority Board, Durham Housing Appeals Board and the Durham Homeless Serves Advisory Committee. I’ve held community leadership positions as PAC 1 Co-Facilitator, Durham’s NAACP Housing Chair, Few Gardens Resident Council President, The Old Five Point Neighborhood President, Co-Facilitator for the Campaign for Safe, Decent and Affordable Housing and the Northeast Central Durham Leadership Council. I have worked as a community organizer for the past 22years. I’ve worked as a organizer for the Durham Housing Authority and then for Durham Affordable Housing Coalition. I worked as a property manager for Moe Geo LLC and RDC Construction. I believe I have some ideals about community engagement and what it means to low income communities that might help with some of the issues facing communities all across North Carolina today.

2 Responses to “Partners Against Crime: Hard work in Durham for true citizen ownership”