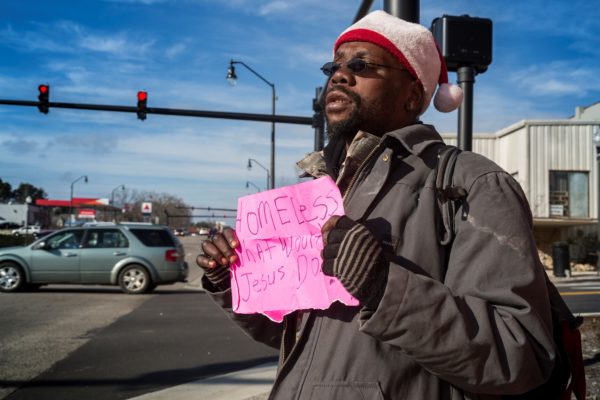 The Fayetteville City Council adopted an ordinance in 2008 that would sometimes permit panhandling and other times make it a class 3 misdemeanor. The ordinance made it illegal for an individual to panhandle in a median, on the shoulder of a roadway, at a bus stop, ATM, downtown or after dark.

Citations have been written, arrests have been made, although, largely the ordinance goes unenforced, cases are dismissed and fees are waived.

Panhandlers are not going to pay fines……who knew?

There is no data to suggest that panhandlers attack or intimidate motorists or pedestrians and there is no data to suggest panhandlers get injured while panhandling. If a motorist or pedestrian does not want to give to a panhandler, they just don’t. No one is hurt and the world still turns. There is obviously enough money handed out by pedestrians and motorists to make it a worthwhile endeavor for some panhandlers to keep coming back. It is a social covenant that nobody, including the recipient, has much affection for, but at times can be necessary.

I don’t know anyone who hands a panhandler a dollar expecting to change that person’s life based on their donation.  Will they go buy drugs or alcohol with that money? Maybe, but if you’re truly worried about that you don’t donate at all. The dollar does not come with strings or conditions it is merely a, “Hey dude, make yourself more comfortable for a minute, it looks like it really sucks to be you.”

Maybe that means buying a sandwich or maybe it means buying a 40 ounce of beer, either way, there are no questions asked and it is just something that happens and has always happened in any city.

The Fayetteville Observer reported, in July of 2016, that city councilman Chalmers McDougald, a pastor, believes that the panhandlers “seem to be more professional” and “just taking advantage of people.”

If that is the case, people would stop giving and because there is no dollar to be made, panhandlers would stop asking, and the social covenant dissolves.

The Fayetteville Observer also reported that former Police Chief Harold Medlock stated that panhandling wasn’t going to end because of all the: “Bleeding hearts rolling their windows down after feeling guilty at church.”

Sound cold? Sure, but that doesn’t mean there isn’t any truth to it. What this statement illustrates more than some frostbite is law enforcement’s attitude toward panhandlers, many of whom are homeless.

15 Responses to “Panhandling: A public nuisance or the enemy of economic development?”