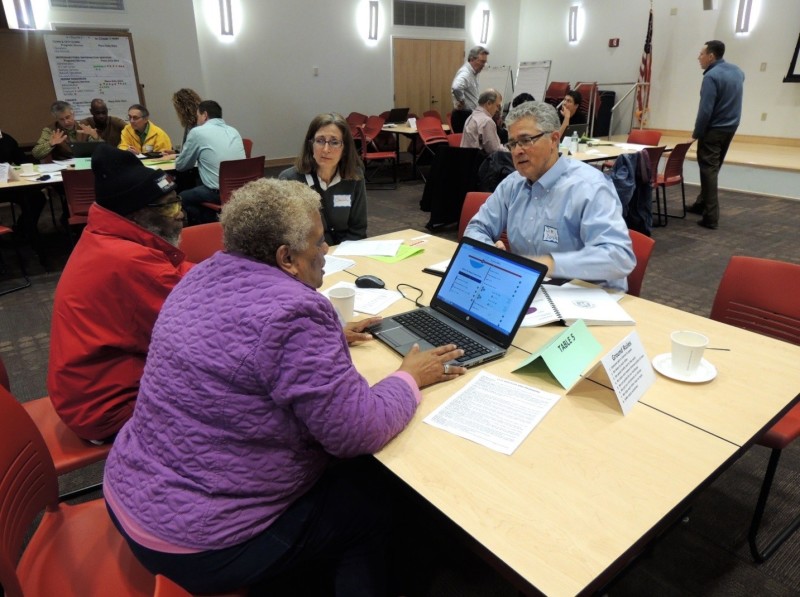 One useful way to look at different methods of civic engagement is the division between “thick” and “thin” efforts. In the words of Matt Leighninger,  Vice President of Public Engagement at Public Agenda, thick engagement “[enables] large numbers of people, working in small groups, to learn, decide, and act together,” while thin engagement involves people “as individuals rather than in groups.”

I don’t think it’s as simple as thick always being better than thin. Civic engagement is not a slice of cake. In fact, some of the best projects combine both styles of engagement, as I’ll illustrate below.

Thick engagement, on the other hand, frequently requires more thought and planning. Differentiated from traditional public meetings and hearings with limited opportunities for citizen input (Leighninger labels public hearings as “conventional” engagement), thick activities involve larger-scale public deliberation. They can range from seminal constitution-making processes in nations transitioning to democracy to collaborative planning processes between parents and school administrators. They might include some online activities, such as a neighborhood forum on e-democracy.org, but thick kinds of civic engagement entail a hefty amount of relationship-building before being adopted by a critical mass, and participants engage much more with the online tools (and by extension, their communities) than via thin actions.

The vast majority of findings document the effects of thick engagement. Some snippets: Horizons, a massive five-year public engagement effort dealing with poverty reduction in many communities in the northwest U.S. which involved more than 100,000 people, had impressive results:

In addition, Brazilian participatory budgeting processes  have been shown to lead to better managed and more financially sound municipalities as well as improvements in a number of community social indicators linked to income and access to basic services.

None of this is to say, however, that public engagement practitioners have to choose one or the other. In fact, some of the most successful long-term initiatives combine both thick and thin approaches in often surprising ways.

So-called “pothole monitoring” service delivery apps might seem like a thin engagement. Indeed, if users’ actions ceased with each report filed, they would be. But certain players like SeeClickFix  have “thickened” it   by creating points-based incentives for users to engage others in collectively creating neighborhood “watch areas”.

Moreover, a growing number of thick engagements are incorporating thin elements into their programs.

AmericaSpeaks, an innovative Washington DC nonprofit that recently closed its doors, was at the forefront of this syncretic form of public engagement.  It pioneered the incorporation of videoconferencing into multi-site meetings, and later linked online forums with in-person deliberative assemblies.

Much of my work here at Engaged Public is informed by this realization. While we still organize and implement thick, long-term, statewide dialogues involving a multitude of citizens and civic leaders (such as Building a Better Colorado), and while we started offering thin online budget simulation beginning in 2007 with our old Backseat Budgeter application, we do our best to combine thick and thin methods whenever possible.

One of our biggest projects to date, TBD Colorado, epitomized this. Over the course of 70 meetings during a three-month period throughout the Centennial State, we combined aspects of traditional public hearings with facilitated community discussions, included a variety of speakers, complemented it with an interactive website, interspersed it all with keypad polling, and kept people cognizant of the difficult fiscal trade-offs necessary by employing Backseat Budgeter.

I’d love to hear your experiences of civic engagement activities, particularly those that try to bring together thick and thin engagement. Please offer your thoughts or questions in the comment section below!

And check out our original “thick and thin” blog post here.

2 Responses to “How “Thick” or “Thin” is Your Civic Engagement Project?”