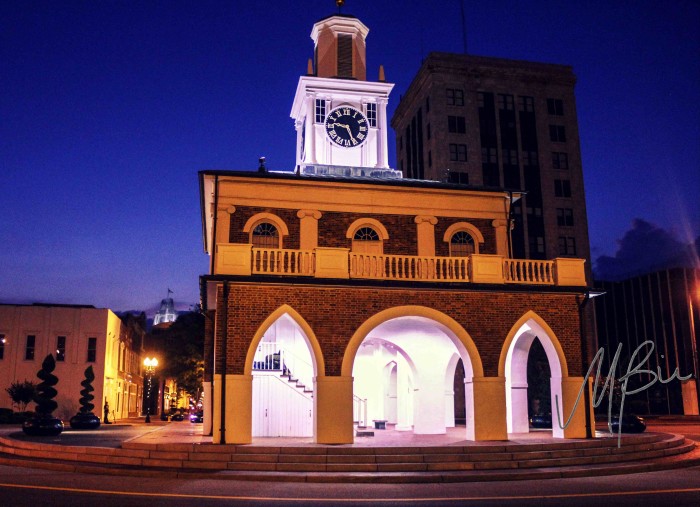 On the heels of the June 2015 Charleston racially motivated massacre, that left 9 dead and one injured, there has been much discussion about the use of historical symbols by government entities. The overarching idea is that the government should not appear to be biased and should represent the interest of the entire community and not certain segments. The Market House in downtown Fayetteville is one of those symbols up for debate.

The Market House is rich in history and southern heritage. According to Barksdale (2015), the original building that sat where the Market House sits now, once served as the State House in which the U.S. Constitution was ratified in 1789. When that building burned in the Great Fire of 1831, the Market House was erected in its place in 1832 . The site also hosted a Civil War battle in which Confederate Lieutenant General Wade Hampton killed 11 Union soldiers and captured a dozen more.

The unique architecture employs a town hall-market scheme found in England and is the only National Landmark in Cumberland County (National Park Service, 2008). The second floor of the structure was used as the town hall and a general meeting place. On the first floor vendors came to sell meat, produce, and the occasional human.

Yes, I said human. Slaves were auctioned primarily under estate liquidation or to pay a debt. The actual number of slaves sold is ambiguous, but it happened, on the steps surrounding the structure.

Does that make the Market House a slave market? No, certainly not.

In the 1990s the Fayetteville Police Department and Fire Department recognized the potential to offend citizens and began to phase it out of their insignia. Not only because some found the symbol offensive, but because it too narrowly defined Fayetteville and it was time to move past the Market House.

Officials in Fayetteville decided, in July 2015, to conduct an online survey of popular opinion regarding the issue on the city’s website. There were over 900 responses with 90% of the participants stating that they were not offended by the city’s logo.

I am a computer savvy executive member of the Fayetteville Branch NAACP. I have not seen this survey. In a community of roughly 200,000 people, a sampling of .45% of the population is representative of the entire population? I think not.

How do we find a more accurate view of public opinion?

Public participation is essential to provide the city with the most accurate data on which to make their decision. How can the city do better to attain a higher quality of input? Must civic engagement incorporate a social media aspect when trying to find out how people feel?

When talking about gathering public perception, social media has become one of the most heavily utilized methods in which to disseminate and gather information. It should be used as one of the pieces of the puzzle, but not solely relied upon when making a decision that relies upon respect and fairness.

9 Responses to “Fayetteville History and City Symbols: the Weakness of Online Opinion”