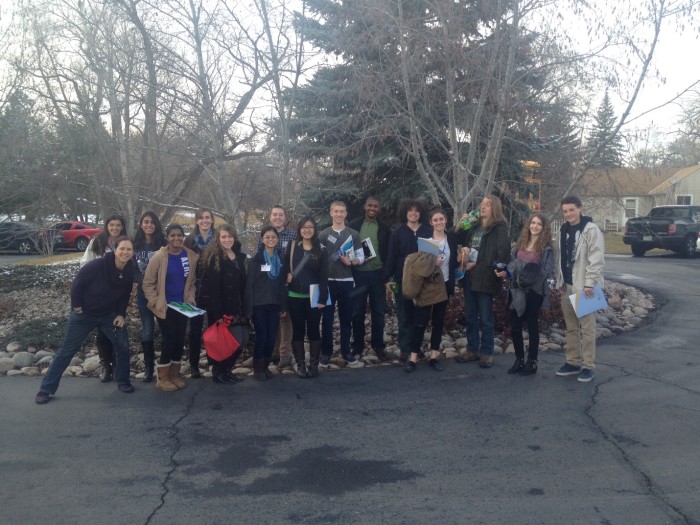 The importance of engaged and informed citizenry in a democracy is undeniable. Throughout the last several years, there has been a push for more deliberative problem-solving tactics in communities across the country. Some in the deliberative community  have had conversations about helping to build a collection of what we call “super citizens”; folks who have a clear sense of what deliberation is and are energized and passionate about making democracy work on a community level.

I have been part of a faculty-college student deliberation research and action group at Colorado State University. I’m pleased that in the last year we have worked with high school students to build their interest and skills in deliberation and democracy.

The Center for Public Deliberation (CPD) at Colorado State University was established in 2006 by Dr. Martin Carcasson. CPD trains groups of student facilitators and helps them act as an impartial resource to the Northern Colorado area. In 2006, the number of students in the group was fewer than 20. Currently, the program floats between 30 and 40 student associates each semester.

Since the CPD’s inception, our group has been called about to facilitate community issues regarding the aging population, bike safety, reinvigoration of the downtown area and school budgeting issues just to name a few.

Without a doubt, the ability to engage college students in deliberative processes is an excellent stepping-stone to the structural change we need within our democratic systems to improve their functionality. However, starting before college could be a helpful way to engage students in high school with issues near and dear to them.

In 2008, the CPD set up a student Think Tank which is currently comprised of about fifteen high school students. The students in this group receive similar training to that of college facilitators, but have different meeting times and are focused on issues specific to their age-group.

The most recent work done by our student Think Tank was related to standardized testing. Martin helped these students create pre-surveys which allowed them to compile data about the overall perception students have about standardized testing. After taking these surveys and forwarding them to friends, they were able to attend a meeting with members of the school board and discuss the issues they found in the survey answers. A couple weeks after this meeting, the students met with Martin and myself and worked on theming some of the survey answers, as well as reflecting on them. This is a topic many high school aged students are passionate about, and it was a great way to start getting them engaged with democratic processes before they entered college. Throughout the summer, some of this data will be compiled and shared with the school district, which provides students with the opportunity for a tangible payoff for their efforts.

On April 14, these students participated in the nationwide mental health conversation which took place through a virtual interface only. During this hour-long session, students were separated into groups and took part in a process facilitated through their smart phones about mental health and how we could better manage this issue and help those we know who are struggling.

This new interface appeared to go over well with this particular group of students because it allowed them to put their smartphones to productive use in a democratic setting. Those interested in engaging high school-aged students may be interested in looking into this particular exercise as we found it to be quite enriching for our students. Many of them said the prompts helped them keep the conversation on track and the interactive portions of the exercise allowed for data collection about the overall process.

Of course, there are specific challenges related to keeping volunteer facilitators engaged with our processes (especially teenagers; I think we all remember well how our minds tended to wander when we were that age). An important point is these students are carving out time from their already busy schedules to work with us to learn new facilitation skills and discuss the importance of engaged and informed citizens. Often, this requires us to be prepared with more interactive learning components than are necessary with the college crowd.

The process on mental health provided us with a promising new avenue to take this engagement to the next level. With each meeting, we are able to see students in the Think Tank become more energized by deliberative democracy, but they are certainly quite concerned with the end game of these events; often this has to be something much deeper than “we will eventually improve the democratic process through this work.” They want to know what is going to happen or change soon as a result of the conversations they are having. This encourages those of us who are practitioners to think a little more deeply about our endgame as well. For most of us, a general long-term goal for processes is creating more informed citizens and encouraging open, democratic discussions about polarizing issues, but for some, especially those in younger generations, a more tangible result is desired.