In the wake of the recent election and political upheaval across the country, my favorite professional organization – Emerging Local Government Leaders, fondly called ELGL – issued a call for people to begin channeling that civic involvement into issues and advocacy at the local level.

It’s a simple idea, but the recent election and unprecedented civic engagement mean that more people than ever are engaging with the public service matters that affect us most. So, ELGL said: 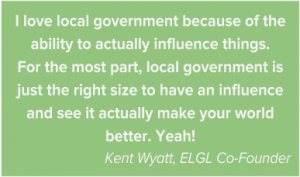 “If you want to get involved, no matter which political party you’re from – why don’t you take another look at local government?”

ELGL has been listed as a top national professional association, providing cutting-edge resources for new strategies in local government leadership.

A great example of this was recently brought forward in the Triangle region of North Carolina by Raleigh City Councilman Corey Branch, who decided to take town hall meetings to the citizens themselves. He hosted a meeting in Southeast Raleigh, an area where high development pressure and inequality in growth have led to new issues facing citizens and their government.

He calls it being proactive: “It’s about the community being more forward-thinking; being proactive as a community with the government assisting, not always leading.”
That’s a great concept to remember in our own engagement work: that government – especially at the local level, where the sphere of influence is smaller – doesn’t always have to lead. Sometimes, they just need to listen.

At the Raleigh town hall meetings, citizens reminded local government staff and elected officials that communicating opportunities for engagement remains one of the biggest barriers to getting more people involved – especially in communities where internet access isn’t reliable or computer literacy rates are low. They brought up needs for parks, for housing, and for economic development and entrepreneurship.

However Raleigh decides to handle these issues, they’ve made a great first step by taking themselves out of their offices and out into the communities they serve. Doing that, they’ve given people in those communities an opportunity to take their post-election engagement to a new level – to help lead the way for local governments.

And when cities, counties, and towns listen in this way – invited by ELGL to think about more ways to get out of their offices and into the communities they serve – they’ll hear that most people are more than willing to help them drive change. As one participant in the Southeast Raleigh Town Hall said, “This can be a team effort. Decide which position on the team you can play, and when the ball is passed to you, be ready to shoot.”

Whether you pull for the Tarheels, back the Pack, or dress up like a Cameron Crazy, that’s a basketball analogy that can bring us all together. Cheers to a year of being ready to shoot, whenever we’re called on, to help our local governments do the best work that they can do.