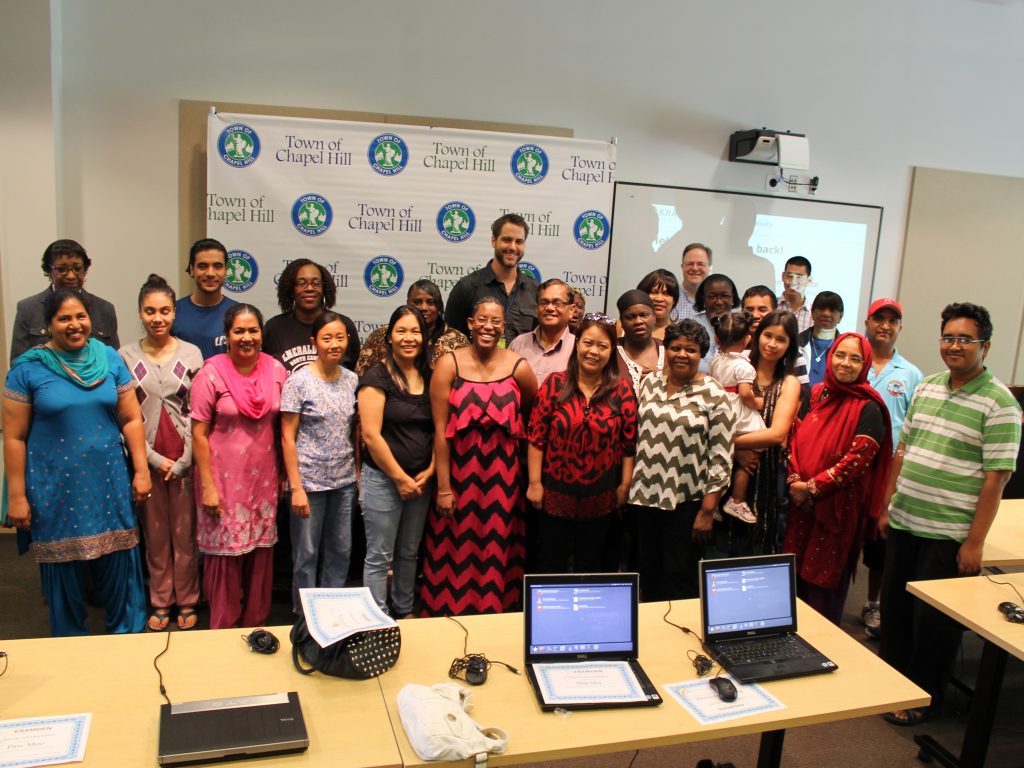 It wasn’t a grand setting for a groundbreaking announcement – the basketball court of the South Estes public housing community in Chapel Hill. Eager volunteers stood at folding tables under the hoops ready to sign up residents for digital literacy classes and announce the Town’s new effort to bring free internet to all public housing residents.  Trays of sausage and chicken biscuits, and jugs of sweet tea sat ready for an estimated 100 people.

“We were hoping to sign up perhaps a dozen residents for the computer classes,” said Sarah Vinas, assistant director of the Town of Chapel Hill’s Office of Housing and Community. “Instead, we signed up over 50 people that morning, and another 10 were put on waiting lists.”

The community partners who gathered that morning in May 2015 were pleasantly surprised. A school bus driver arrived with little time to spare, as she was between driving shifts. An older man approached with careful steps, using a cane to make his way over a grass field toward the basketball court. Three women in colorful saris and sandals approached with tentative expressions. A young mother with children in tow took her place in line.

They were signing up for a program that seeks to address two major impediments to digital inclusion: lack of access to a computer and lack of technology skills.  Through a four-part course series, participants learn basic computer skills — and upon completion of the course are awarded a laptop computer.

Amplifying our Impact through Partnerships

Since announced in May 2015, six cohorts have completed the program (100 residents by November 2016).  Key outcomes, as reported by participants include:

In 2016, the Basic Digital Literacy curriculum was expanded to offer a Job Seeking in the Digital Age Course, made possible through a $10,000 grant from Google Fiber.

A news release states the Town’s overarching goals: “By establishing public-private partnerships like these, the Town of Chapel Hill strives to enable all members of the community to take part in the new forms of civic engagement, expanded opportunities for education, and economic growth associated with bringing faster internet speeds to the region.”

Through in-person meetings and tabular surveys, we discovered things about our Chapel Hill public housing residents that we didn’t know before. There are about 1,000 residents who live in a total of 336 public housing units. Town staff looked at demographics of residents, which have shifted over the last several years with increasing racial and ethnic diversity.  Currently, there are 30 countries represented in the Town’s public housing.

We work with several public schools in the community to mentor at-risk kids and provide wrap-around support services to promote academic success.  We partner with community agencies that receive human services funding from the Town to provide programs for residents, such as ESOL, cooking, gardening, smoking cessation, and after school care for children. Many are excited to be involved. 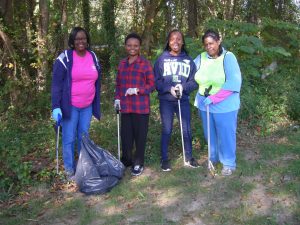 Community engagement at its best bears fruit in a ripple effect of partnerships and increased understanding of purpose. This is what we’ve seen in Chapel Hill, NC, after we refreshed our efforts two years ago to engage with residents of our public housing neighborhoods. Although we still have much work to do, we are seeing that each touch-point of moderate success seems to bring more community collaboration and involvement. It has taken a momentum all its own.

To learn more about our programs, visit our website at http://www.townofchapelhill.org/town-hall/departments-services/housing-and-community.