Who do these people think they are?! Why would citizens want to change something that works perfectly well, and has for years! Why waste time and money on something silly like a festival, or art project that will only last a day, week or month? We have bigger issues than worrying about one neighborhood’s wants. We know what’s best for our citizens and they will see it our way, or learn to deal with it.

OK, perhaps that seems a bit extreme and over the top; however, it wasn’t that long ago when municipal government would decide the direction of a whole city without the input of the people, neighborhoods, and the assets in it. Sadly, if you think some of these cities don’t exist anymore, think again. Fortunately, some cities have caught on and seen the light. They now understand the people within the city ARE the difference makers, the creative conquerors, and they should be invited to the table to not only help be the drivers of initiatives, but help create the new initiatives of the cities they live in. However, this means that city agencies are going to have to become much more flexible in a very rules and regulations oriented arena, or else the cities slow to adopt engagement from the communities will see youth and the new wave of companies flock to the cities that are inspiring new ways of looking at… well, everything, a city has to offer. Cities that highlight walkability, unique areas to live, great parks, art, and a city council not afraid to try new things, even the ridiculous, will prosper! 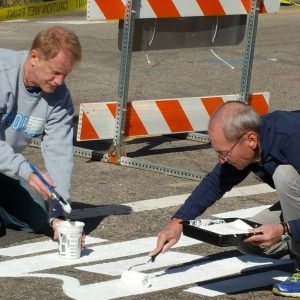 A recent example of a creative conqueror making a difference in Raleigh, NC just took place in the Glenwood neighborhood. Jim and Donna Belt, two retired patrons in the city, have been trying for the past 10 months to take bland ordinary crosswalks and turn them into art pieces called Cool Walkings. Sounds easy enough: get some paint, a few artists, and make a design on the street. Not so fast. It took looking at the bureaucracy of changing city ordinances, closing streets, several thousand dollars including grants, finding artists and volunteers just to name a few. The city didn’t make it easy for an amazing project to happen in the being stages. If municipalities continue to create hoop after hoop for creative people to jump through, then nothing will get accomplished. City professionals should be finding more creative conquerors and paving the way for people like Donna and Jim, not putting roadblocks in their paths.

So, how do we find more creative leaders who are willing to push the envelope, not give up when they get a little, or a lot of push back and see a project through to the end?

According to author Peter Kageyama who wrote “For the Love of Cities” and most recently “Love Where You Live,” there are 7 steps to this process:

The writing is on the wall if a city wants to take it to the next level of community engagement and ownership in the spaces we live. City officials need to embrace creative conquerors, break the old mold of doing business by making it easier for unique ideas to happen, and resolve that they want to take a fresh look of the city through the eyes of amazing people who have so often been over looked. If more cities do this, it will most certainly be a pretty cool space to live in. So come on, what’s your big idea!

Omaha, Nebraska native, Dan Bagley, moved to Raleigh North Carolina in 2006 with his wife and NC State Lecturer Kate Lavia-Bagley. He received his undergrad in Recreation Education and Masters in Recreation Administration from the University of Nebraska. Over the past eight years, Dan worked as the Director of Green Road Community Center where he developed numerous programs for the community and surrounding areas. He also worked with many nonprofit agencies at that time such as the Boys and Girls club and Wake County Health and Human Services. In February 2014, he took a new position with the City of Raleigh’s Housing and Neighborhood Division as a Community Services Specialist where he has a passion for connecting and building strong communities. In 2008, Kate and Dan’s family grew when their triplets Emilia, Quinn and Grace were born. Their son, Quinn, who has Hydrocephalus and Cerebral Palsy, inspired Dan and Kate to start their own organization in 2011 called Beyond Special Needs. It allows families with special needs children to share stories and ask questions, share or sell used equipment, and find therapists to help their children in every possible way. Dan very much looks forward to continuing his work in community development!

4 Responses to “Turn to the Creative Conquerors”