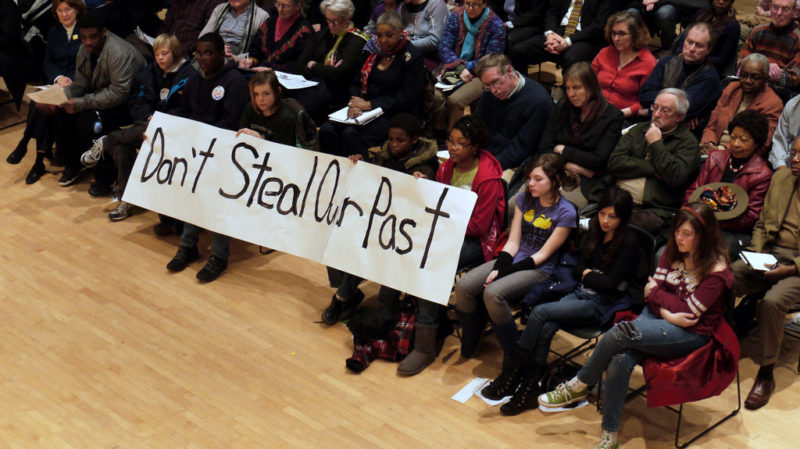 We have witnessed and participated in the dialogue between community, politicians, government, nonprofits and other stakeholders when a well-meaning economic development initiative came to a community they care for.  Old East Durham is a community undergoing rapid transformation, with issues of displacement and gentrification widely acknowledged.  Economic benefits for the members of the community whose profiles in material poverty were used to justify the initiative very much remain an open question.

We are aware that the portrayal in this article of politicians, government officials and nonprofits is somewhat flattened and that these stakeholders, individually and collectively, have additional incentives, but the incentives we focus on exist, dominate, and are ignored at great peril to the community.

It is our proposition that it is the role of grass roots community organizations to ensure that the ambiguity caused by the good will, hospitality, grace and sense of inclusion inherent in the word “community” is used in a measured way and that there is minimum ability to use that ambiguity to mask state-subsidized displacement of low-income, African-American renters or to switch promised improvements in individual lives with improvements to amenities, especially in neighborhoods whose houses are already more firmly on the path to financial appreciation than their residents.

In order to play its role effectively, a community grass roots organization needs to know what incentives other stakeholders have, and make sure that the organization only confers credibility, legitimacy and respect on those stakeholders who try to direct economic development initiative benefits (financial rewards, by and large) to those members of the community whose economic profiles were used to sell the economic development initiative to politicians, other government officials, nonprofits, civic and religious institutions.

Conclusion.  Communities change.  It’s inherent in the word, “community,” but the pace, reasons, nature and process around that change are topics worthy of candid and, at times, hard discussion.

Unless the community grass roots organization uses its credibility, legitimacy and respect to keep everyone on task, the economic development initiative will succeed for everyone – except the members of the community whose profiles in material poverty were used to justify the initiative in the first place.

Hello, my name is Clarence Terry and here is a small bio about where I’m from and just a few of the organizations that I am involved with in Durham, NC. I came to Durham, NC from Washington, D.C., where in most part I resided all of my life. Born and raised there by two loving parents (Annette Holmes and Henry Hamilton).  I grew up as a child in a very low income area of D.C. known as Southeast, where just making it was the best you could do and to hope for.  Well enough about my childhood, now let’s move on to what I do now here in Durham, specifically Old East Durham. I am a community leader with the non-profit organization known as Old East Durham Communities in Partnership (usually called, “CIP”).  We formed five years ago and have been doing great work in our community since then. I am also a member of several other organizations such as F.A.D.E (Fostering Alternative Drug Enforcement), OARNC (Organizing Against Racism, North Carolina).  I have received two awards since doing this work and they are, Community Organizer of the Year for Durham, N.C. by UE (Underground Equity), in 2012, and was also given the Neighborhood Heroes Award for 2015, by the InterNeighborhood Council, which is their highest award presented.

I’m Philip Azar.  I am a semi-retired attorney.  I practiced law in Washington, D.C., Dubai, U.A.E., and Memphis, TN before moving to Durham, N.C. in 2005.   In Durham, whether working for the local Habitat for Humanity affiliate and Clean Energy Durham or participating in community and neighborhood groups such as the InterNeighborhood Council of Durham, Trinity Park Neighborhood Association, Old East Durham Communities in Partnership, Northeast Central Durham Leadership Council, and Southwest Central Quality of Life Project or making an unsuccessful run for city council, I’ve had excellent opportunities to witness communities and neighborhoods seek to define and achieve their ambitions.  Prior to coming to Durham, my professional privileges included serving as general counsel to a FedEx subsidiary and being the Legal Advisor, Office of the Director General, The Economic Department, The Government of Dubai. Son of Rose Theresa Connell and Henry Amin Azar, I’m a combination of Irish and Syrian/Lebanese/Armenian and try to apply different perspectives and skills to my community work.  I try to be aware of and acknowledge publicly real and perceived tensions between my community work and my ownership of 3 duplexes.  (For example, I have purchased duplexes with community support and avoided others at the request of community.)