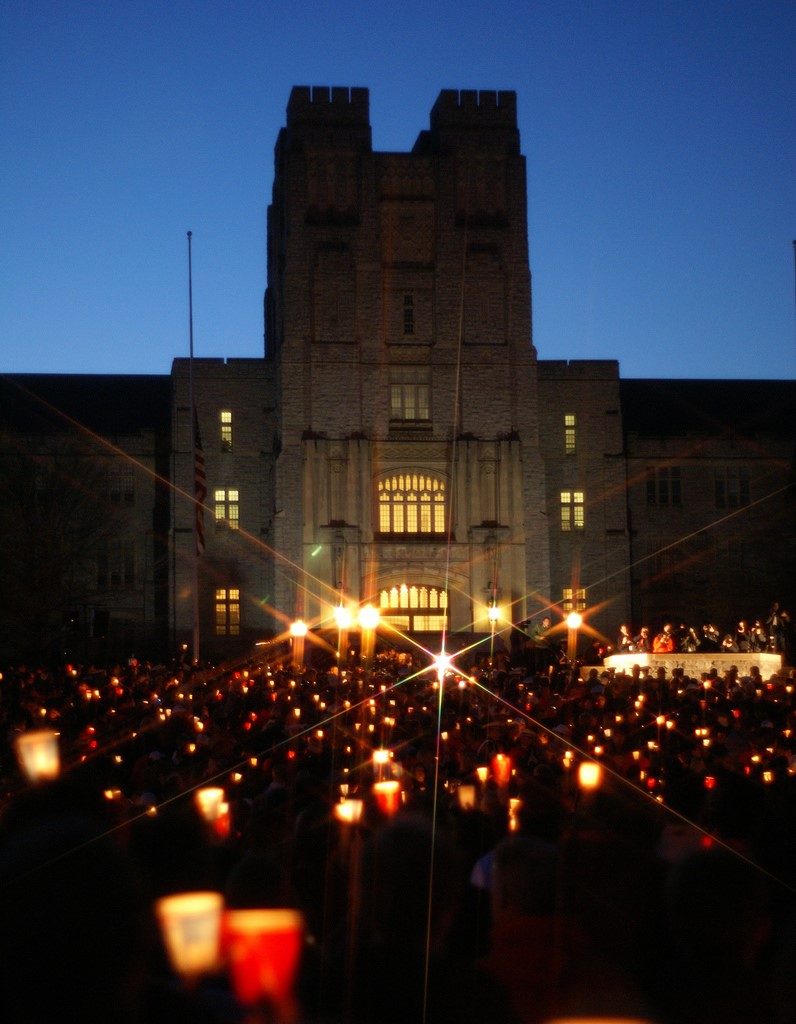 For the first couple years we lived in Blacksburg, Virginia, I refused to participate in the Virginia Tech Run in Remembrance. It just felt too weird.

Every April, the university organizes a 3.2-mile run to memorialize the 32 students and faculty members killed in 2007 by a student who’d chained the doors to Norris Hall shut and sprayed classrooms with bullets. The Virginia Tech massacre remains the largest mass shooting in the country, evoked every time another monster murders a lot of people, which is far, far too often.

In Blacksburg, April 16 is a day that will live in infamy.

There are residents who still can’t help but give a PTSD-fueled shudder when they hear a cavalcade of ambulance sirens.

Not me. I didn’t even live here at the time. I heard about it on the news in my house in Iowa, and thought, “How awful,” then more or less moved on.

This was a trauma, but not my trauma. A momentary kick in the gut, that’s all.

Then I moved here from Texas in 2012 and discovered that in some ways, April 16 happened yesterday. People brought it up in PTO meetings and dropped it in casual conversations. They promised on social media that they would #neverforget. A horseshoe ring of 32 gray Hokie stones in front of the administration building acted as a permanent reminder, but there were also, I knew, a series of memorial events each spring. The Run in Remembrance was one of them.

I never signed up. Because I didn’t feel intimately connected with the tragedy, horning in on it felt somehow false, an ugly and undeserved display that one researcher termed “emotional rubbernecking.”

I hadn’t earned the right to be there. But after a year of studying place attachment, I changed my mind.

April 16 was the town’s tragedy. Now that I lived here, it was mine. The difficult things that happened here—even long-ago history—belonged to me in a sense. For better or worse, I’d inherited them and needed to do my part caring for them.

For someone who wants to feel like they belong, that matters. In a 2015 study, Miriam Rennung and Anja S. Göritz, psychologists at the University of Freiburg, set out to test the effects of sharing negative emotion. They gathered study participants into groups of three or four and had them watch video clips from sad movies like Schindler’s List, either collectively, semi-circled around a large screen, or on their own laptops with earbuds, not knowing that the person next to them was watching the same thing.

The result? Participants who communally watched the same clip felt closer to each other and more socially cohesive afterward than the people who’d stayed in their own head space. Experiencing negative affect together, at the same time, with attention focused on the same depressing point, made them feel bonded.

In other words, the public mourning that I’d eschewed as made-for-TV spectacle— the candlelight vigils, the public memorial services, the placing of stuffed teddy bears at community shrines—fosters social connection among people who vitally need it. Hopefully, write Debra Jackson and Kim Usher in an editorial in the International Journal of Mental Health Nursing, it will “contribute to community healing and recovery from trauma.”

So a few weeks ago I lined up alongside the Drillfield, Virginia Tech’s enormous quad, in my orange t-shirt and sneakers, and with 10,000 other participants observed a moment of silence for 32 people who I’d never known and never would.

Despite that, the run isn’t morbid or even particularly sad. The marching band plays. A capella groups sing along the route. Everyone yells “Let’s go Hokies” as we stream into the football stadium.  But for at least that one moment before the running starts, we focus our attention on the single horrific thing that unites us as people who live in Blacksburg. I’m guessing it’s similar to how people in Newtown, Connecticut, feel united, or residents of Brussels, Belgium.

None of the current crop of Virginia Tech students was here in 2007; the freshman class was 9 years old then. We see the shooting at a remove, but because we live here, we’re in it together.

What about you? Have you ever participated in a candlelight vigil in your town or another kind of community mourning ritual? Did it help?

(This article comes from “This Is Where You Belong,” Melody’s blog at PsychologyToday.com.)

9 Responses to “The Power of Public Grief”