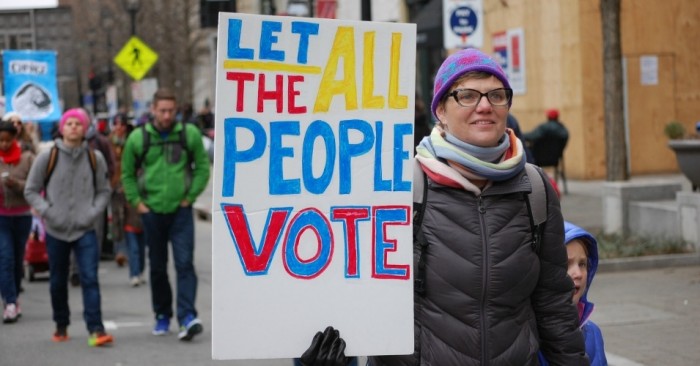 As individuals, and as members of communities, we are often asked to be more engaged. We’re asked to join committees, boards, to sell donuts and coupons books to support the band and the chorus. We’re asked to pass out fliers, to share things on Facebook and to tweet. We’re asked to take surveys, to participate in neighborhood clean-ups, to register people to vote. We’re told that we shouldn’t complain unless we go to the ballot box, even as North Carolina and 21 other states have recently passed restrictions making it more difficult to vote. Curbing early voting hours, voter ID laws, and same-day voter registration, the restrictions make it more difficult for some to be engaged, and to make their voices heard in local and national conversations.

In the face of urgently needed reforms across many of our systems, it can be both overwhelming and frustrating to maintain engagement as an individual citizen or even as a group.

The sheer number, size and complexity of problems can also lead to ineffective attempts at large scale systems change. Some argue that the Occupy movement lacked significant impact because its members couldn’t come together on common goals, or a clear message. However, even more telling are the numbers of people who are not protesting or engaging at all because overwhelming evidence shows them that their effort will not make a sustainable difference. For many, their grandparents fought peacefully in the streets for the ability of blacks to register to vote fifty years ago, only to the see the income gap between blacks and whites in this county expand to 40% larger than it was in 1967.

Along with many others, I watched Selma at the Carolina Theatre in Durham, NC on Martin Luther King Day. For those who haven’t seen it, the film shows citizens protesting Jim Crow era voting restrictions in Alabama, and Dr. King and leaders of the Southern Christian Leadership Conference and Student Nonviolent Coordinating Committee lobbying for national policy changes around voting. The people featured in the film march, in peaceful protest, in the face of grave danger to themselves, their families and their communities.

One scene in the film provides insight into the process that Dr. King and other leaders went through to pinpoint the focus of their protest, and other scenes highlight the tension between the different groups who were using varied approaches in the fight for civil rights. Despite this tension, they knew that in order to be effective, they needed to be laser-focused on their goal, clear in their message and unified. Ultimately they were successful, and their marches on Montgomery led to the passage of the Voting Rights Act of 1965.

Even as the blows of bully clubs on peaceful protesters in Selma were broadcast on the national news, it was difficult for leaders and citizens of the 1960s to come together and engage effectively for a common cause. In light of recent news it could be argued that unarmed children and men of color shot dead in streets, parks and stairwells, and the ensuing protests, are just as obvious representations of systems that were not built to produce equal outcomes for everyone. When talking with friends and colleagues about weekly news reports on deaths of people of color at the hands of white police officers, the conversations begin about racially biased policing and police brutality, and quickly turn to the causes, effects and ways to combat structural inequality and institutional racism. The discussion takes many avenues, including but definitely not limited to the following:

Given the myriad effects of structural inequality and institutional racism, how do we stay focused, educate ourselves, and encourage others to join us in an effort to reform systems that were never intended to produce good outcomes for everyone?

In Greensboro, Charlotte and cities across the Triangle, citizens are educating themselves at an anti-racism training with the Racial Equity Institute (REI). This two-day training is equipping participants with an historical analysis of race in the United States, an organizational definition of race and talking points to begin discussions with friends, family and coworkers. This training is a good place to start with regard to engagement around some of the most entrenched issues that are affecting all of us.

REI training is a local opportunity to empower communities with the knowledge they need to have conversations like Dr. King and other leaders were having 50 years ago, conversations that would determine the focus of their actions and the success of the movement that opened ballot boxes to everyone, regardless of race or education level. Voting restrictions are back in this country, restrictions that Supreme Court Justices Ginsberg, Sotomayor and Kagan stated would be irreconcilable with the original Voting Rights Act.

Let’s work together to ensure that our states don’t slide further backward. Let’s equip ourselves now with the tools we need to remain engaged together against systems that need to be reformed.

One Response to “Staying Civically Engaged in Divisive Times: A Case for Anti-Racism Training”