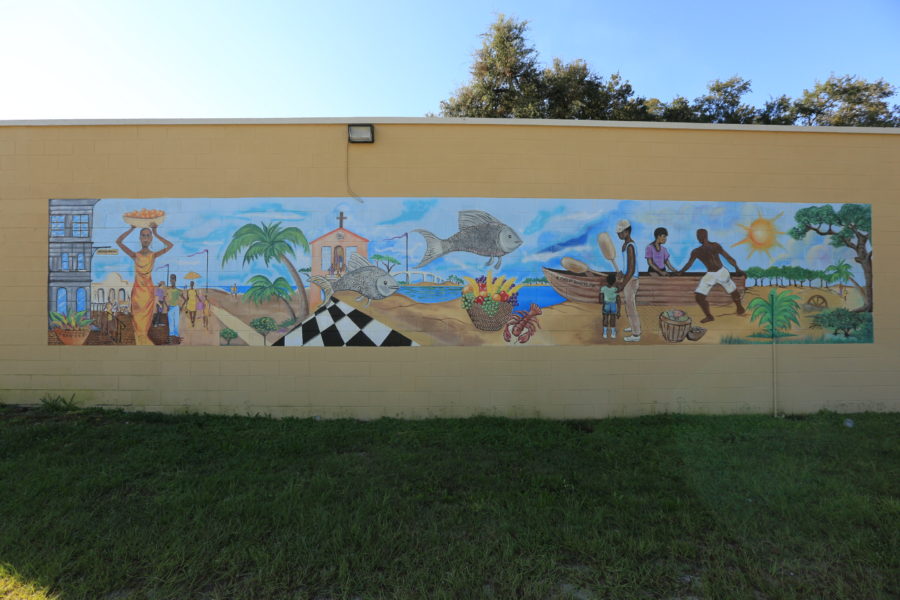 The word “resilient” is embodied in the mural above from Eastside Jacksonville—workers on the waterfront conducting trade and the checkerboard symbolizing the challenges they must overcome. Merriam-Webster Dictionary defines resilient as “able to become strong, healthy, or successful again after something bad happens.” It can also mean “beginning again when a first attempt doesn’t achieve the desired outcome.”

At this moment for East Jacksonville, “resilient” embodies the passion, drive and spirit of a coalition of residents, businesses, and community organizations in Jacksonville’s Eastside neighborhood. Together, they are charting a new course for their community–marshaling relationships and assets, bringing resilience and restoring hope to this once bustling neighborhood.

Located east of downtown, the Eastside is one of Jacksonville’s oldest African-American neighborhoods. Until the mid-twentieth century, this enclave of homes and businesses supported Jacksonville’s port and shipbuilding industry as well as downtown.  But with the devastation of Hurricane Dora in the 1960’s, suburban flight, and industrial shifts, the area fell on hard times.

Just blocks away from the city’s sports and entertainment district, Eastside residents’ and business owners’ hopes were re-ignited when the City targeted infrastructure improvements and investment in new public facilities for the area leading up to Jacksonville’s hosting of the NFL Super Bowl in 2005.

Single family housing was built by local community development nonprofits to complement the City’s public investment. During this period, vision and action plans for physical redevelopment and environmental improvements were also developed. Yet, as time marched on plans were shelved without ever gaining traction.

Fast forward to 2012. Several newer studies began to shine a light again on Eastside. Then, an effort undertaken by LISC Jacksonville in partnership with community development nonprofit Operation New Hope, created a resident-led process called EPIC (Empower People…Inspire Change) Communities, in which residents as well as business owners and service providers came together over a three-month period to create a quality of life plan, setting short-, mid-, and long-term priorities that could be accomplished within five years.

Due to limited funding, Operation New Hope and LISC brought together Eastside and its neighboring community, Springfield, for the two neighborhoods to create a joint plan. At the conclusion of the process, they had developed a blended plan of action items and priorities as a roadmap for neighborhood transformation in both communities. Now, three years later, both neighborhoods can point to progress on action items from the original plan:

This was just the beginning. Through the combined efforts of neighborhood citizens, City of Jacksonville, Operation New Hope, and LISC, a second wave of neighborhood mobilization is underway.

In Springfield, the focus is on Main Street—business promotion, attraction, retention, as well as building rehab, tenant lease-up, and area beautification. Two new restaurants, a health clinic, and a bank are in the works.

On the Eastside, the emphasis is on organized action.

First, Eastside residents determined that they wanted help in establishing a credible and reliable organization to be a resource for residents, businesses and other entities that had an interest in the Eastside. No longer were these citizens willing to accept others making decisions for their community and giving lip service to residents’ perspective.

In July 2015 with the help of Operation New Hope and LISC, these citizens began the formation of the Eastside Community Coalition (ECC), a formal community -based organization.

The ECC views its role as a neighborhood resource and liaison, coordinating and building partnerships with stakeholders, other organizations, and the City of Jacksonville to improve the Quality of Life in the Eastside. To that end, it will monitor quality of outcomes to ensure improved services, housing, safety, and beautification.

As a first step, the group scoured all existing plans and studies to identify projects already proposed or on the drawing board that were still valid and needed to be implemented. They then hosted an introductory meeting with area nonprofits to explain their goals

Their next step involved a day-long series of presentations by all major community development organizations to share and gain support of ECC for any projects or development plans for Eastside.

Although ECC is less than a year old, they have partnered with Groundwork Jacksonville to assist in the launch of the Eastside Public Market, an open air market featuring fresh foods and artisan goods starting in August. It promises to be a major destination site in conjunction with NFL game days.

Summer youth programs are being mobilized and brought to scale. The group has endorsed the development of more than 100 units of workforce housing as proposed by the collective of community development housing nonprofits.

While the ECC has much more work ahead, this body has shown that a community can rebound and be resilient.

As the Eastside mural artist Daniel Wynn states, “Murals can give a sense of direction. You can record history through symbolism—and provide a glimpse into the future.”  The Eastside Community Coalition is certainly the engine leading a new direction in Eastside.

3 Responses to “Resilient Eastside: Do With Us, Not For Us”