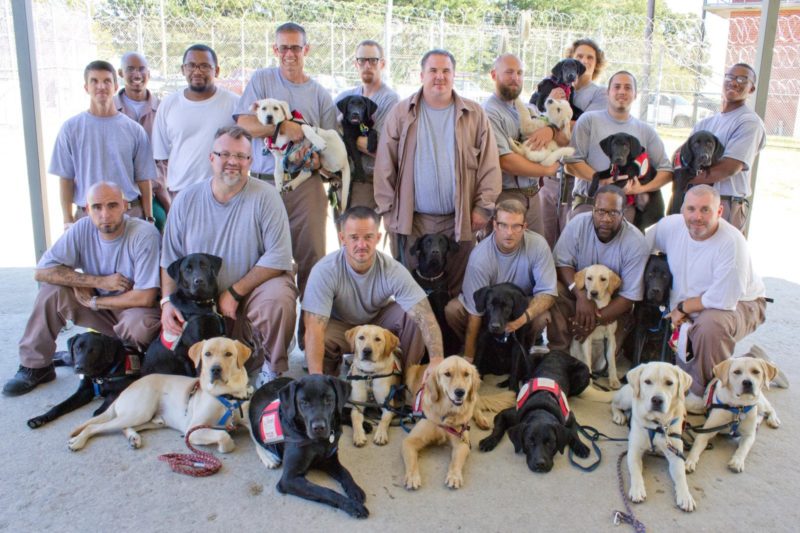 In early October, I helped to celebrate the progress of service dogs being trained by inmates at the Franklin Correctional Center (FCC) near Bunn, NC.  The 18 men are trainers in At Both Ends of the Leash (ABEL), part of the work of Eyes, Ears, Nose and Paws (EENP), a Carrboro, NC nonprofit that matches service dogs with people with special needs or disabilities.

EENP pups-in-training live at FCC for about 18 months, from the time they are five-months old until they are ready to be partnered with a client.  Two EENP clients were part of the October event, but will actually receive their dogs on Nov. 4th as part of formal “graduation” held at the Carrboro Century Center.

I had many powerful reactions to the demonstration of skill, and talking with the ABEL trainers.

One feeling was gratitude:  here are men who are with their dogs for many weeks or months, working on specific skills for an eventual match. And after all their time, investment and love, they must say farewell to a trusted companion.  Wow. That’s tough under any circumstances, but even more so in the context of incarceration.

Another reaction was feeling part of an extended family – something that crosses locations and, yes, even prison bars.

The “bridging community” is the focus on dogs getting ready for special service. From being “prison pups” to being paired in a long-term dog-human team, EENP is the conduit for a multi-place system of helping, growth and accomplishment.

Trained dogs give more independence to people with physical or cognitive disabilities. The human-dog teams become better integrated in their home communities. And, at least for the two clients who saw the ABEL trainers demonstrating the dogs’ skills, these clients understand the love and commitment already poured into their canine helper.

Another community is what most of us take for granted: the freedom of movement and communication and choice that is outside prison walls.  We take a walk. We go to a favorite restaurant. We can see service dogs in action. We are part of this kind of assumed, “normal” community.

And prison. There are about 38,000 adults incarcerated in North Carolina state prisons. The image of prisons is one of danger and careful control of inmates’ movements and actions. But there are different subgroups, even communities, within any jail or prison. I was glad to get a view of the ABEL community, which is hopeful and supportive. While many people who are incarcerated do various kinds of productive work, the ABEL trainers build trust, skill and accomplishments that are then “given away.” This is deeply moving.

The ABEL program is serious about making choices, at BOTH ENDS of the leash.

Stephen Johnson was one of the 18 trainers at the October ceremony. He addressed the audience of about 20 visitors, as well as his ABEL colleagues.

At Both Ends of the Leash. Now, when I first heard it I thought: “Aww, someone came up with a witty way of naming this dog program. Cute. Ok, give me my pup and let’s go.” What I didn’t realize at the time is that EENP is really serious about the other end of these leashes. That we are not just training dogs but that working with the dogs to re-train ourselves.

You see, in the quarter of a century that I have been incarcerated I’ve held countless jobs and have been involved in more programs than I care to remember. In all of that time no one has ever shown an interest in how I was doing (unless I was behind with my production in which case a whole bunch of unwanted interest was coming my way).

I know that this is not just a dog program. This is ABEL: where one’s failures are celebrated and encouraged. ABEL: where concentration is placed upon finding that one positive thing you did. And often in my case, that search can take a while. This is ABEL: where you will hear “how can I help?” so often that it becomes a running joke… until you find yourself sincerely asking it to someone in need.

I celebrate the risk that ABEL trainers take: to try, and fail, and keep coming back. To work against the stereotype of the dangerous inmate. To better themselves and make a positive life-changing impact on someone they have never met.

If that’s not a celebration of community–all three communities–I do not know what is!

How else should we think about bridging the walls and bars of our jails and prisons?

There are prison ministries and other forms for making inside/outside connections. How does community engagement work for thousands in NC where their sense of separation is so much a part of their lives?