I recently moved to the Town of Cary from a rural area in Western North Carolina. To say that things are different would likely be the understatement of the year; Cary has over 155,000 people at last count, and my hometown had about 2,500.

My family and I shifted from one of the smallest towns in the state to the seventh largest. That’s a process that will make you pay attention to the differences between where you’re coming from, and where you’re going.

It highlights the need for advocates of citizen engagement to provide more nuanced and custom approaches to citizen engagement that can work for both rural and urban communities – where there are often different cultural norms, values, and lifestyles.

In Cary, for example, the services are pretty amazing, thanks to a highly educated population, high property values, and higher-than-average median household incomes. There are more greenways than I can count, sidewalks everywhere, art and cultural events, and a world-class soccer park. The schools are fantastic and the cost of living – at least, compared to other locations in the Triangle – is pretty low, for the quality of what you get. It’s safe, it’s clean, and it’s consistently ranked as one of the best places to live in the country. 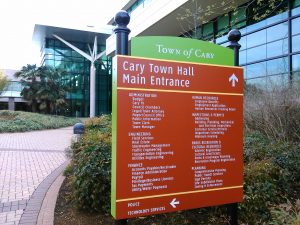 The Town’s approach to citizen engagement in Cary reflects that audience. People can come to meetings, but they can also watch Board meetings live on local TV channels and YouTube. People can mail in comments on proposed amendments or changes, or they can provide that information online. And perhaps most significantly, Cary’s outreach is pretty comprehensive: there are a number of different newsletters, not just one, that cover different topics (traffic alerts, upcoming events, and other news), in addition to RSS feeds. There are multiple Facebook & Twitter accounts – not just one, but one for the Police & Fire departments, one for Parks & Rec, and one for the Town itself. Even volunteer board members are engaged from the beginning: I was appointed to the Advisory Board for Parks, Recreation, and Cultural Resources soon after I moved here – and there’s an orientation, a get-together for board volunteers, a Town email address, and a t-shirt.

It’s true that the public comment periods prior to each open meeting are about the best way to give your feedback; coming to the meetings in person (on a weeknight, in the middle of dinner) is still about the best way to find out what’s going on. Local weekly newspapers provide coverage of decision-making, but online resources for participatory governance are almost nil. There are very basic government websites that aren’t optimized for mobile and maybe one social media account (usually created by one enterprising department rather than as part of an overall communications strategy). And if you’re appointed to a board, you’ll get one mailed letter telling you the dates and times for your meetings, and be expected to show up, with little recognition and no formal orientation.

But what advocates might normally tell people in rural areas – oh my gosh, we have got to fix that! Let’s bring in a consulting firm to do some engagement and outreach! – isn’t necessarily what’s best. These engagement strategies do, to a significant extent, reflect the culture and values of the people who live in rural places. People talk face-to-face more, even with elected officials, because the population is small enough to make that possible. People meet at gas stations, churches, and grocery stores – not in a formal way, but as threads in a common social fabric that is much stronger than a one-time outreach push would be. And those encounters in a rural area often provide just as much public feedback as a formal strategy for engagement would in an urban one.

People who don’t live in rural areas may not always see the unofficial, personal interaction that happens as a key part of an engagement strategy – but when it’s done right, it can be just as effective as the online tools that many urban communities are implementing. It’s an important lesson for those of us working to increase engagement to remember: that there are different approaches for rural and urban communities, and we’d do well to shape our language and best practices to reflect that.

One Response to “Moving to Cary From Rural NC: Urban and Rural Approaches to Citizen Engagement”