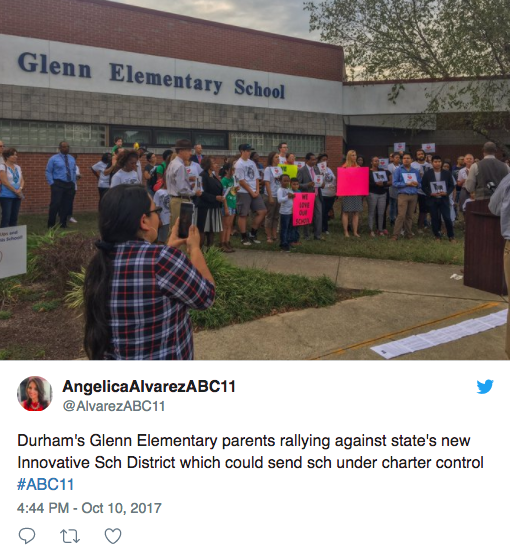 The elementary school to which my infant son is districted—Glenn Elementary—was one of six NC schools (and two Durham County schools) on the short list for possible takeover by the NC Innovative School District. Lakewood Elementary was the other.

The Department of Public Instruction’s website indicates that the NC Innovative School District (ISD) was established in 2016 by the NC General Assembly to improve student outcomes in low-performing schools. Schools chosen for the ISD are either required to close, or transferred to a charter school operator to implement school improvement strategies developed in partnership with local communities.

After significant pushback from community members—undergirded by the Defend Durham Schools campaign of the Durham Association of Educators— both schools were removed from the list for possible reassignment to the ISD. 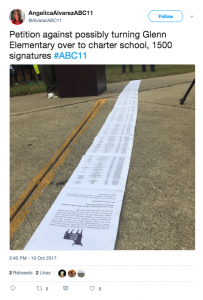 In addition to the demographic table above, income data raise significant questions about the schooling choices affluent families are making as well. The free and reduced lunch rate at DPS is 66%—meaning that at least 66% of DPS students live in households where the income is below 185% of the federal poverty level (approximately $45,500 for a family of four). Meanwhile, only 34% of Durham families make less than $50,000/year.

I am starting to realize, as I tune in more closely to conversations in my community about PK-12 education, that many parents who believe in the value of public schools conceptually may not enroll their own child in the school to which they are districted—or into public school at all. Based on the fact that Durham leans politically progressive, it seems reasonable to infer that a significant number of parents who believe in public schools, who believe in the benefits of students from different backgrounds being educated together, are not making educational choices for their children that align with those values.

The reasons that parents may have for choosing to transfer their child(ren) to a different public school, to enroll their child(ren) in private or charter schools, or to homeschool, are many. No parent wants to send their child to a low-performing school. Additionally, I can imagine that the idea of sending a child to a school where a large majority of children don’t share that child’s race, ethnicity, or cultural background isn’t comfortable for some parents. But—taking legislative solutions like busing out of the equation—how will schools become more representative of our city, without parents choosing to take a perceived risk and enrolling their children in public schools, including the schools to which they’re districted?

Given the compelling evidence that racially, ethnically, and socio-economically diverse schools benefit all students (more on that here and here), I find myself wondering about the role of community engagement efforts like we just saw at Glenn and Lakewood. Could Defend Durham Schools, or a movement like it, be leveraged to deepen parents’ commitments to their city’s public schools? I can imagine a multi-racial, cross-class coalition of parents who actively encourage their fellow parents to invest in their neighborhood schools—not only by signing petitions, by speaking out on Facebook, or by donating school supplies, but by enrolling their children and using their social capital to increase attention to needed supports for those schools. While parents might not be willing to make this choice alone, they may feel more empowered to commit to this choice together.

Improving public education in our city and in our country will require complex solutions. This post is not meant to assert that enrolling more white and/or wealthy children in our public schools will improve school performance. I do think that flawed systems are more likely to be improved when everyone is affected by their dysfunction and calling for their reform—not just those who lack the opportunity to opt out. What do you think?