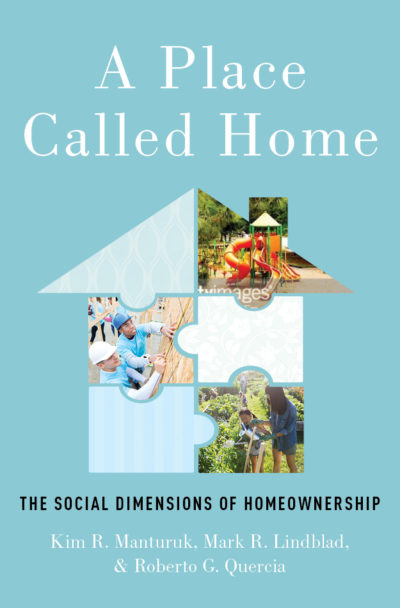 The Great Recession and crisis of 2007-2010 raised questions about whether low and moderate-income families should be home owners, given the financial risk, or would be better off as renters. Beyond the financial arguments about property investment and equity is the question of other potential benefits in being a homeowner.

I’m glad to point readers to research by UNC-Chapel Hill’s Dr. Roberto Quercia, and his colleagues Kim Manturuk and Mark R. Lindblad, in their new book A Place Called Home: The Social Dimensions of Homeownership. They found that homeownership has important non-financial benefits for low- and moderate-income people.

The voting data showed that low- and moderate-income homeowners voted in municipal elections at a higher rate than homeowners. In addition, this homeownership effect on local voting was stronger in disadvantaged neighborhoods characterized by higher poverty and unemployment.

We logically see that trusting one’s neighbors can make community collective action easier, because there is a clearer path to see shared goals and to share the work for those goals. Voting can be a sign of several things, including commitment to one’s community.

Social capital is measured as the presence of neighbors who would provide helping behaviors such as provide assistance when sick, helping with computers, or finding a job.

However, given the many improper lending practices that left many low- and moderate-income families devastated when the housing bubble burst, the researchers argue for the importance of “homeownership done right” [Foreword, p. xvi]. This means strong pre-purchase preparation for borrowers, responsible lending products, and post-purchase assistance “to avoid catastrophic outcomes.”

Quercia, Manturuk and Lindblad include tips on “how to do renting right” where changes could help renters achieve similar social capital through renting rather than owning property. Specifically, these changes to leases involve include longer tenant leases and greater customization to the dwelling.

Of their policy recommendations, two that stand out are:

Here’s where you can find out more about their research