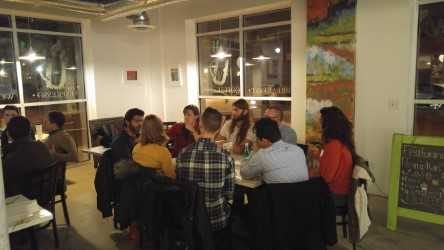 The first time I saw Mr. Smith Goes to Washington, I was captivated. The fact that my high school civics teacher would show a dated, black-and-white film to a classroom of rowdy high school juniors enjoying the onset of a much more fast-paced, digital age was always going to be an ambitious choice, but I absolutely loved it. My growing fascination with politics found a fitting companion in the classic plot of an idealistic simpleton taking on a corrupt Senate. I too wanted to be Jefferson Smith, in the 23rd hour of his arduous filibuster with seemingly the entire country against him, fighting the good fight. The bad guys in that movie were emblematic of a system, and not limited to the “R” or “D” denoting one’s party affiliation.

Today, however, our information-saturated age, widespread social media usage, and the increasing ideological echo chambers most of us (myself included) largely live in, mean that series featuring crude, ends-justify-the-means anti-heroes like House of Cards are the apex of political drama. That is, of course, during the few times when those of us on different sides of the political aisle are even watching the same show. Screaming heads on MSNBC and Fox News paint incredibly different pictures of America, as do slickly-made but nuance-free clips from the Young Turks or PragerU, or unabashedly partisan hit pieces from Mother Jones and the National Review. Sadly, in spite of alarming statistics on our growing levels of political polarization by researchers from Pew and other organizations, Americans have become used to demonizing the “other”.

But does it have to be this way?

I’ve written about grassroots attempts to build empathy, embrace nuance, and engage in community conversations in previous posts. Some of my perspectives come from an attempt a friend and I are making to address political polarization right here in Denver. Enter Building Bipartisan Bonds.

We started with two simple premises: 1) in spite of our political differences, we actually have a lot more in common than we think, and 2) small-group discussions with people who think differently than us are a great way to bring people together.

After much back-and-forth and numerous texts, emails, Facebook posts, and phone calls, in September 2017 we managed to assemble a politically diverse group of 25 Denverites in a small-but-cozy coffee shop basement. Literally, all we did that first meeting was to go around the room, introduce ourselves, and provide thoughts on the prompt, “What does community mean to you?” The responses kicked off a riveting discussion, with very little facilitation needed. While some spoke about ethnicity or culture as forming their conception of community, others expressed a desire to join communities with those who share similar values. Eventually, the conversation veered into how to reconcile these different visions of communities, and how to feel a part of something bigger than oneself while also maintaining space for disagreement.

The reaction was overwhelmingly positive. Participants were growing increasingly frustrated with the growing divisions – or, to some, perception of divisions – between community members, while at the same time yearning for spaces where civil dialogue can take place with those who have different backgrounds and points of view. In the surveys we passed out afterwards, many individuals who self- identified as progressive indicated that this was one of the first times in recent memory that they had engaged in an open, friendly atmosphere with a conservative, and vice versa. It soon became clear that we were on to something.

Since that time, we’ve had three more lightly-facilitated Meetup events. During our second meeting, we directly took on the thorny topic of political disagreements, ideological bubbles, and the self-segregation of many of our communities. Our third meeting saw us attempt to visually map out on paper different political categories, such as “Independent”, “America First”, and “Socialist”. Finally, each group tried to come to a consensus on tangible policy proposals related to homelessness during our most recent meeting.

All of the Meetups have involved dividing participants into politically-mixed small groups, then letting an activity or list of discussion questions guide them through the ensuing dialogue. Before the night was over, one member of each group would briefly lay out what type of conversations they engaged in, what some of the differences between group members were, and where they found common ground. Some of us would eventually continue the friendly debates and deliberations informally at a bar nearby.

Based on participant feedback, we hope to expand this idea in the coming months, potentially to social activities such as a hiking trip or an evening of “political speed dating”. Starting such a group in your community likely takes less time than many of you might be thinking. But, regardless, there will be some bumps along the way. Here are some lessons that we learned during this last year:

1) Recruiting a politically-mixed group is essential to ensuring that participants hear different viewpoints. My co-organizer and I quickly realized that most of our friends and acquaintances were also progressive, partly because we live in a fairly left-leaning city. As a result, we partnered with another Meetup group consisting of young conservatives for our first couple of events; asked friends to invite any conservative, libertarian, or even independents friends they had; contacted staff from Colorado’s House and Senate Republicans (a few of whom even attended); and reached out to over 50 conservative individuals and groups via email, social media, and even paid Facebook ads. Our membership still leans progressive, but much less so than when we first started out

2)  Icebreakers are some of the most efficient ways to build empathy. A catch-22 similar organizers often run into is how to make participants feel comfortable enough to share their views with others, all while trying to ensure that they interact with different people each meeting. We’ve found that well-crafted icebreakers within each small group work wonders, and help build camaraderie before participants start their discussions. We’re especially fans of the Marshmallow Challenge, which has the added benefit of subsequently allowing us to go over its empirical results showing greater success among those who are less worried about social approval.

3)  Organizers should focus their pre-meeting attention on those who are less comfortable with airing their views. To maximize attendance, we didn’t start most of our events until 15 to 20 minutes after the first attendees arrived, and this gave those who weren’t late time to chat and/or network. However, chatting and networking is more difficult for some, particularly when they don’t know anyone else present. Recognizing that I’m a bit introverted at times and naturally one of these people, we made an effort to make everyone feel welcome as soon as they walked in, and focused our limited pre-meeting time on people who looked like they might be a bit shy, hesitant to open up, or even ready to walk out if we didn’t get started soon (this actually happened during our third Meetup).

4)  Consider inviting local nonpartisan groups to speak and participate. You might be surprised by how many groups are working for nonpartisan/bipartisan political reform in your communities. At least here in the Denver/Boulder area, there are quite a few. We experimented with inviting a couple of them to speak before our second meeting, and it worked splendidly. Steve McIntosh from the Institute for Cultural Evolution and Tyler Fisher from Unite America (formerly the Centrist Project) gave very pertinent remarks on our growing political polarization and what we can do to counter it, as well as participated in our small-group discussions afterwards. Somewhat similarly, to kick off our discussions on homelessness and what to do about it during our fourth meeting, we had the City of Denver’s homeless services coordinator as well as a representative for a prominent homeless rights organization speak about the policy proposals at hand before the groups began to tackle them. They also stuck around and helped each group with background information during their discussions.

Additionally, Victoria Fann’s June post about her experience hosting a Ben Franklin Circle comes to mind. These meetings also center around small-group discussions (only up to 12 members), but on the Founding Father’s “13 Virtues” which range from the ever-pertinent “industry” and “humility” to values that might seem archaic today but can still spark a deer discourse, like “cleanliness” and “chastity”.

Starting a group to promote civil discourse can come in many shapes and sizes. Not all directly touch on political polarization, as our Meetup group does, but when done well, all can help us increase dialogue, empathy, mutual understanding, and, ultimately, consensus building in our communities.

3 Responses to “Fostering Civil Dialogue in Polarized Times: A Case Study from Denver”