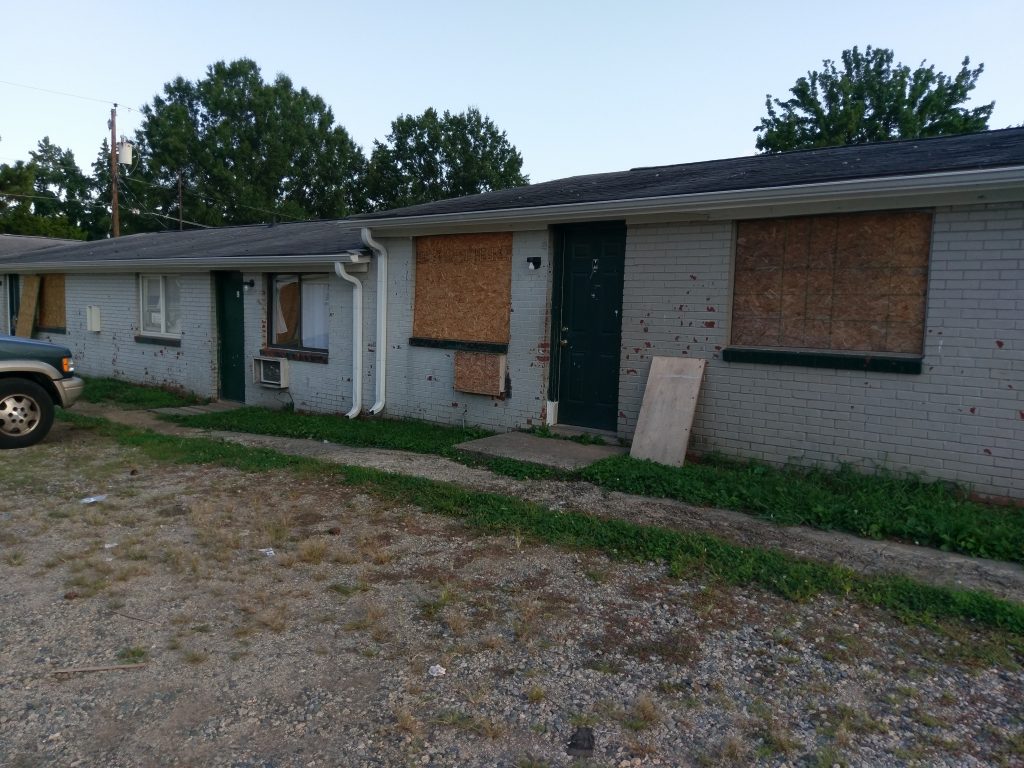 Tenants have courageously started to reverse the downward spiral of the Avalon Trace Apartments, with the support of Greensboro organizations. In December, they told their stories cautiously, anonymously, to university students in the compelling video (view video here). “If you could hear our voices, would we matter?”, describing the deteriorating physical conditions and negligent landlord response. But well-founded fear of retaliation and of being displaced from their homes had silenced most complaints.

When code enforcement inspectors get a complaint of housing problems, they inspect and write up any code violations found. The owner(s) and others with legal interest in the property get notices of the violations and of a hearing to discuss plans for correcting violations. After the hearing, an Order to Repair is issued stating the date for compliance. If the violations are not corrected by that date (or by the date of any extension), the owner is fined and the property is condemned and can no longer be occupied. The case is referred to the Minimum Housing Commission, a quasi-judicial body appointed by city council, to decide whether to uphold the inspector’s Order to Repair or to order demolition or to grant more time. Current Greensboro ordinance allows the city to repair if the owner fails to comply with the Commission’s Order to Repair within 90 days; the city can then place a lien on the property for cost of repairs, in the same position as a tax lien. The purpose is to restore housing rather than demolish if owners are unable or unwilling to make necessary repairs.

Until August 10, when they came to the public hearing of the Minimum Housing Commission to demonstrate support for code enforcement’s Order to Repair. They were surrounded by neighborhood association leaders, housing advocates, and friends. Between bold tenants, unprecedented testimony by Cone Health, and the “Would We Matter?” video, commissioners shifted between tears and outrage. “Can we subpoena the owners? (to the property manager) “How can you sleep at night?” It was the first time that Greensboro has used the Order to Repair for multifamily housing. It was the first time the hospital has testified about the health impact of code violations, citing the extraordinary number of emergency department visits for asthma of Avalon Trace residents, compared to city-wide rates. News & Record coverage of the meeting amplified their voices to the broader community (view article here).

Then on August 22, when tenants were preparing for a meeting to discuss their concerns with code enforcement inspectors, Legal Aid attorneys, and community police officers, one of the Avalon Trace owners showed up. The property manager had seen a flyer about the meeting and alerted the out-of-state owners. He got an earful from emboldened tenants! As Josie Williams, coordinator for Collaborative Cottage Grove, asked tenants to tell about the conditions in their apartments and how they had been treated by management, one after another was brave enough to describe the weeks without heat in the winter, the days with sewage back-ups that rendered bathrooms unusable, the roof leaks never repaired. Twelve-year-old Jonathan told how the locks on his family’s apartment were removed, as an illegal attempt at self-eviction. At first the owner questioned tenants about whether they had communicated these problems to the manager. When assured that they had repeatedly notified the office, to no avail, he launched into his woes about how hard it is to get good managers and maintenance workers who do not steal supplies. Police officer Campbell said there had been only one call about theft of supplies and the owner said, “you can’t report every time”. Attorneys informed tenants that if the value of the property is much lower than the amount of rent paid, tenants can file rent abatement claims for the difference. I reminded the owner that retaliation of any sort would not be wise, especially after attorneys have heard his response to tenants.

Avalon Trace Apartments are for sale. For almost a year, a variety of potential buyers have submitted—and withdrawn—bids, as they check into the realities beneath the spreadsheets that say you can make a profit by collecting rent without spending anything on maintenance. Since the tenants told the owner about the problems and since potential buyers can see code enforcement cases and Greensboro Housing Coalition involvement with just a quick internet search, buyers have been more informed of the risks and costs of rehabilitation. Whoever owns Avalon will know that dangerous housing and unfair treatment will not be tolerated so current potential buyers are searching for ways to rehabilitate the buildings and communicate cooperatively with tenants.

Avalon Trace is in the center of the Cottage Grove community, which was recently awarded a BUILD Challenge Grant for Bold Upstream Integrated Local Data-driven work to strengthen the leadership of community residents in improving health.

Without strong community engagement by tenants and allies, Avalon Trace would have continued the downward spiral to condemnation, dislocation of tenants, and even more resources necessary to demolish and rebuild. Avalon residents, we hear your voices and you matter!

Beth McKee-Huger is a deacon in the Episcopal Church, ordained to lead the church in serving people in need. She has a Master's in Social Work and has focused on affordable housing since 1988, as Executive Director of Habitat for Humanity, Mary’s House, and Greensboro Housing Coalition. Now “retired,” she grows vegetables for the Greensboro Farmers Market and continues to advocate for our community to offer opportunities for everyone to have a good place to live.