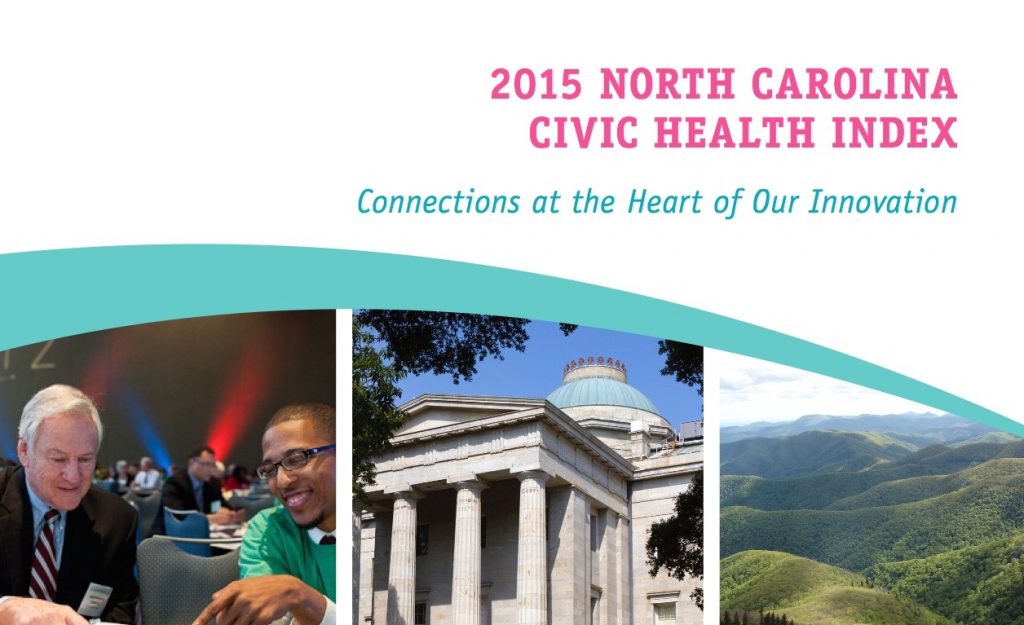 How healthy is civic life in North Carolina? Unlike testing blood pressure, or logging exercise time as measures of physical health, making a measure of civic connectedness and activity is tricky.

I am glad that the NCSU Institute for Emerging Issues took on this effort by producing the NC Civic Health Index, 2015.

The report  identifies “broad lessons” based on comparing North Carolina’s civic health to national data. It highlights “trends and divides” for subgroups – especially youth and racial and ethnic minority groups — having lower measures than older, Caucasian NC residents, and concludes with a “Call to Action.”

Since the Index surveys the whole state, there are certain to be varying results from community to community. Just because some things may look better than the national average, we probably still have plenty of areas to improve (i.e., get out and exercise more!).

I’ll get straight to the results. Further down, I provide a little context about other states’ civic indexes and compare the 2010 and 2015 NC Civic Health Indexes.

The four kinds of measures in the civic index are:

Here is the report’s “civic health at-a-glance” so you can decide what stands out.

One thought for these differences is the long-standing importance in Christian Protestant church participation is being supplemented by growth of Roman Catholic followers (through in-migration of people from other parts of the U.S. and the increasing Hispanic population). The difference on sports and recreation is a mystery to me; maybe it is because I’m happily still playing Ultimate Frisbee, despite my advanced years!

The lower confidence in corporations and media is notable, while there is a smaller “positive gap” in confidence in schools. One irony is that the IEI 2015 index benefited from a Business Committee on Civic Health, which included representatives of several large companies.

What I like about the index is how it looks at different things ranging from individual activities (e.g. charitable donations) to group connections. On the other hand, the confidence in institutions is a complex way to measure civic health. While we may want to have confidence in certain institutions, it is a two-way street. It is hard to overlook media or government poor performance or big errors. Confidence will suffer.

What do you think about these results from North Carolina? Does it seem to fit with your impression of the civic “muscles” in your city, community or county? Here’s some more background about NC and other civic indexes.

The National Conference on Citizenship (NCoC) launched the creation of Civic Health Indexes in 2006 because of a lack of information about the civic vitality of communities. The Civic Health Indexes use a set of indicators that measure actions and behaviors such as the rates at which people vote and volunteer as well as some of the emotional levers of civic participation, like trust and connectedness.

North Carolina is one of 20+ states that have created civic indexes. All state-level indexes are very recent: the earliest one was Minnesota in 2009. Nearby states with civic indexes include the South Carolina , Virginia,  and Georgia . Here is the full list of states.

How to think about civic health

Civic vitality depends on trust, activity and connectedness. Part of our U.S. history celebrates individual liberty, and people not being constrained by the crowd. In the best of circumstances, civic opportunities or obligations do not infringe on family and personal values.

“What is civic health? It is the social and economic vitality that results when citizens interact productively with their neighbors, involve themselves in community institutions, and actively engage in public issues. Communities with high levels of civic health benefit from strong social networks characterized by trust and common purpose. These networks offer essential advantages, including an enhanced innovation capacity that bolsters economic resilience and increasingly drives wealth creation. Improved civic health has proven to be a powerful potential economic differentiator.” http://iei.ncsu.edu/wp-content/uploads/2015/02/NC-CHI-Executive-Summary-FINAL.pdf

Comparing the two indexes, the biggest similarity is concern about young people’s civic engagement. In 2010, they were the least engaged of any age group. In 2015: same concerns, including a call to support government “youth councils.” Here’s an example from Concord about what youth councils do.

Similarly, the higher levels of involvement come from older, wealthier and whiter NC citizens. Both reports call for more outreach and development of involvement by Hispanics, African-Americans and lower income people.

The 2015 Index has recommendations for individuals, community-based organizations, public officials, media, companies, schools and researchers. The current index focuses more on “online and mobile platforms for civic engagement” such that people who do not come to public meetings can still have their voices heard.

Finally, a point echoed in other blog posts, the 2015 NC Civic Index calls on public officials to “Create and empower neighborhood-based organizations to provide meaningful incuse on local issues.”

For digging further, here is the 2010 report  and a PowerPoint presentation from the October 2010 NC League of Municipalities Youth Summit.

Outreach via the IEI Civic Commons

I’ll close by noting the IEI Civic Commons as one online method for raising important issues and seeking input. The intent is “to help citizens work together to better understand the issues that matter most, contribute innovative solutions, and make North Carolina the best it can be.”