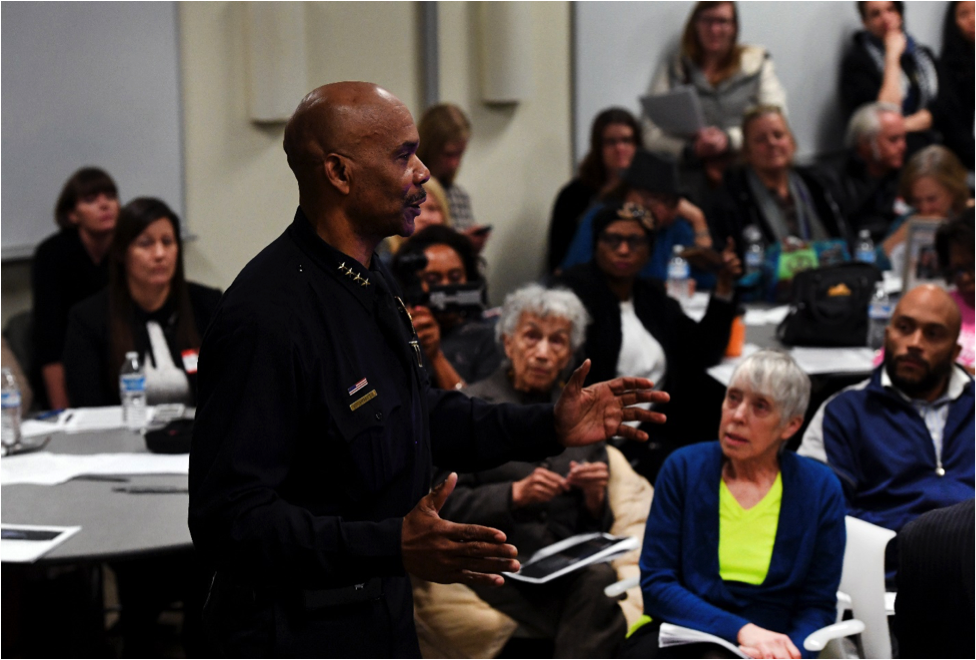 Six board members, two staff members, and a dozen empty chairs were all that greeted public safety director Stephanie O’Malley when she walked into a sleek but soulless conference room in downtown Denver. For a safety department under fire for violent conditions at its main jail and allegedly flouting public records laws, and a civilian oversight agency relatively fresh from being enshrined in the city charter, this was an underwhelming sight.

Yet even in a city regarded as a national leader in holding the police and sheriff’s departments accountable, both the pace of reform and the depth of community engagement are far from consistent.

In Denver, police-community tensions have once again flared in recent months as O’Malley doled out what many viewed to be extremely lenient punishments to three deputies involved in the death of a jail inmate, among other incidents. With community activists decrying the department and defensive police and sheriff’s union members feeling cornered, the city’s citizen oversight board – comprised of volunteer citizen commissioners – has to tow a difficult line between calling for justice in the evening and working with department staff to ensure reform in the morning.

As does the Office of the Independent Monitor (OIM), which reports to the Board. As the modestly-staffed independent agency tasked with overseeing the police, sheriff, and fire forces, it lacks the investigative and subpoena power of some of its US counterparts, but is not entirely toothless. Just last month, the Denver Police Department announced that its sergeants, off-duty officers, and SWAT team members would start using body cameras, in part due to scathing criticism from the police watchdog (OIM) two years prior. But is two years just to reduce gaping loopholes in a flawed policy fast enough?

Many community members say no.

“OIM should be the liaison that’s creating that kind of dialogue, and making sure that those things are in force,” said Will Dickerson, a community activist who formerly worked on police use-of-force issues with OIM. “And I think that they would say that they’re doing that in theory – but I don’t know how many organizations are saying that they [actually] are,” Dickerson said.

In speaking to employees at the OIM, their passion for justice is apparent, though the scope of the work in front of them is immense. For example, of the 40,000 inmate grievances from the City Jail that OIM staff recently examined, they found 54 serious allegations which were treated as “operational grievances” and failed to elicit actual internal investigations. In cases like this, the OIM is expected to play a role in reforming such processes.

Still, the OIM held or attended a whopping 229 events in communities across Denver last year – and that was, by all accounts, a conservative estimate. Their Kids and Cops program has brought together hundreds of youth with dozens of police officers in forums than train officers on de-escalation techniques and young people on their rights and responsibilities when in contact with law enforcement. And the agency continues to play a prominent role in mediating complaints between community members and police and sheriff’s staff.

The bulk of the OIM’s power, comes not when its recommendations are accepted by the police or sheriff department, but rather, when they aren’t. That’s often when it goes public. Indeed, naming and shaming sometimes works pretty well. Public comments by OIM head Nicholas Mitchell as well as the agency’s hard-hitting annual report are routinely picked up by the media and elicit headlines such as “Longer Suspension for Sexy Text Than for Killing Michael Marshall.” These stories frequently have the effect of increasing pressure on internal police and sheriff’s investigations that sometimes seem out-of-touch and overly lenient to members of the public.

Still, in cities like Denver where public safety departments are routinely mired in controversy, community members expect more. That was part of the reason the Denver Justice Project (DJP), a local nonprofit advocating for criminal justice reform, was overwhelmingly successful when it campaigned to codify the OIM in the City Charter through the ballot box last fall.

DJP co-founder Alex Landau, whose own bloody beating by Denver police officers in 2009 made national news, rails against heavy-handed actions by law enforcement and Denver district attorneys failing to indict officers in the aftermath of assaults involving the police or sheriff’s department.

“We should not believe that Denver has come a long way in community-police relations when the data and testimony says otherwise,” Landau says. “We still have a discipline process set up to favor police and deputies. Our communities are still being harassed, negatively profiled, assaulted and killed by law enforcement right here in Denver. This should be considered nothing short of an epidemic and should be treated as such.”

However, the ongoing process to revise Denver police’s use-of-force policy has involved a number of meetings involving a good deal of community input, although the OIM and police union weren’t initially consulted – one of the few times that the two groups agreed. Still, this seems to mark public safety authorities’ growing awareness of the importance of engaging residents. Indeed, in April police officials decided to convene a community group tasked with finalizing the department’s draft policy after numerous complaints that the draft was too vague and the proposed changes too minimal. But after a few months of work, a number of representatives from the police union and training academy resigned – with one even calling the committee “a joke.” There is no longer any representation from police officers on the committee.

Therein lies part of the problem. Too often, when community-led pushes for “seats at the table” are actually successful, activists and officers don’t see eye to eye, and both are incentivized to maintain hardline positions that are not conducive to compromise. Unfortunately, this can lead to officers – whose buy-in is ultimately needed if on-the-ground change is desired – feeling alienated and later dragging their feet in implementing new policies.

Meetings of police oversight committees, such as Denver’s Citizen Oversight Board or the OIM, are also criticized, though they tend to be a bit more transparent and are often televised. At the community events they attend, OIM staff constantly pass out forms that residents can use to issue complaints against law enforcement, and diligently explain the complaint process. Indeed, both Alex Landau and Will Dickerson praise the office for how accessible they are to citizens. But Dickerson expected the OIM to be more forceful in publicly holding law enforcement accountable.

“What was disappointing was we wanted them to come out and support our efforts, but in some ways they didn’t want to seem like they were coming out in opposition to the sheriff, or, more importantly, the [police] chief,” said Dickerson.

Back in the conference room, a few Citizen Oversight Board members did hint at some of these same frustrations, and even pressed Director O’Malley on one of the key questions confronting community engagement efforts across the world: the distinction between simply providing an opportunity for residents to offer feedback – in this case, on the use-of-force policy – and substantively incorporating that feedback.

O’Malley acknowledged that it was a work in progress. She also referred to a similar process where the sheriff’s department was seeking public input on a number of judicial reforms, but no community members had yet offered their feedback.

The back-and-forth was calm – almost cordial. It was a far cry from the anger of activists on the street or that of police union officials on the beat. Some would call this “bureaucratization” of community engagement in Denver necessary. Others would lampoon it for being removed from on-the-ground realities. What is clear, though, is that the pace of progress is slow, and few are happy.